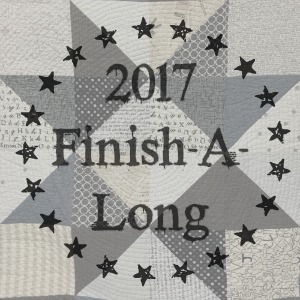 I didn't have a long list, four items exactly, but life got in the way and I only managed three, shame.

So here they are: 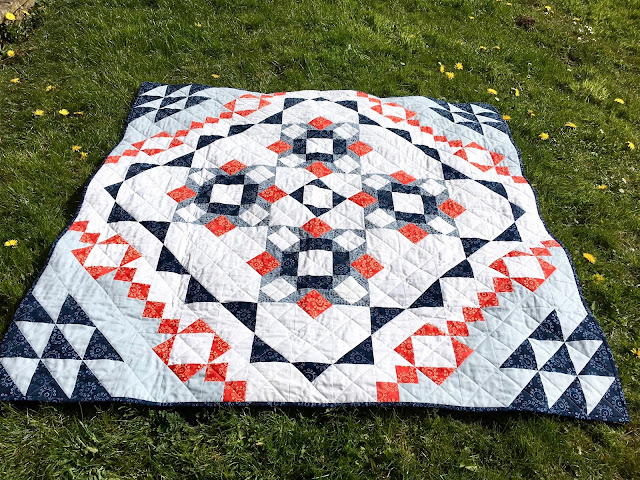 The not a mystery any more quilt which I blogged about here. 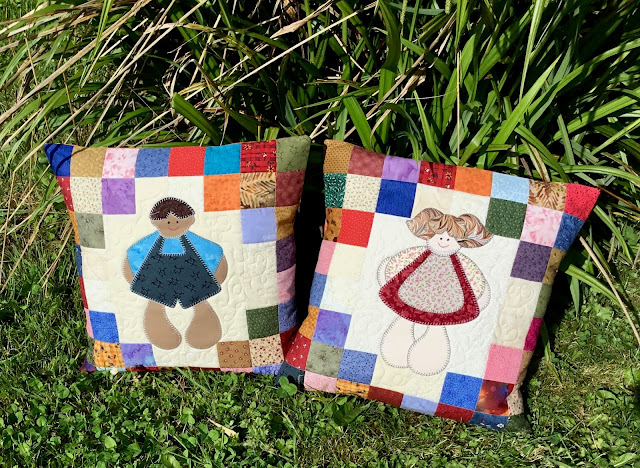 At last I finished these cushions which match the quilt I finished last year.  I blogged about those here. 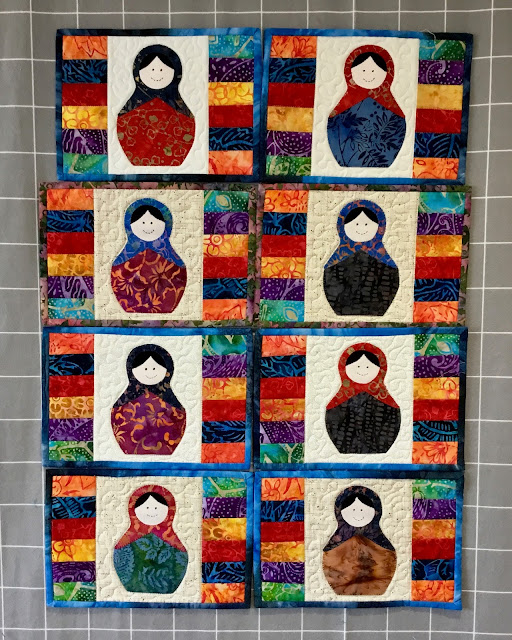 All my mug rugs are now finished, quilted and bound, I also blogged about them here.

The only thing I didn't get done was circles, but I did layer it and half the quilting is done, so much progress has been made.

But you know what they say, tomorrow is another day.

Until then
Smiles from
Kate x
Posted by Kate @ Smiles From Kate at 13:43 11 comments:

Such excitement today, I'm off to Higham Hall for four days embroidery.  I usually know most of the ladies in the class and it is such a giggle, I have a great time.  The teacher, Angie, is excellent, and very patient as she sometimes has to show me two or three times before I 'get it''   The college is wonderful, a stately home, and the food is so good, we get homemade biscuits with morning coffee and homemade cake with afternoon tea too, delicious.

I nearly didn't post this week I have so little to show, or rather that I can show.  So, what have I made? 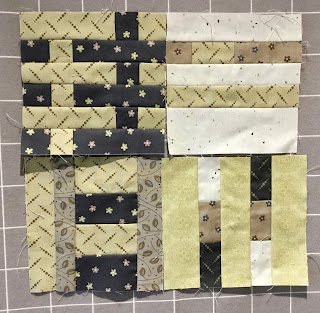 I went to my sewing group on Saturday and I made four new blocks...... 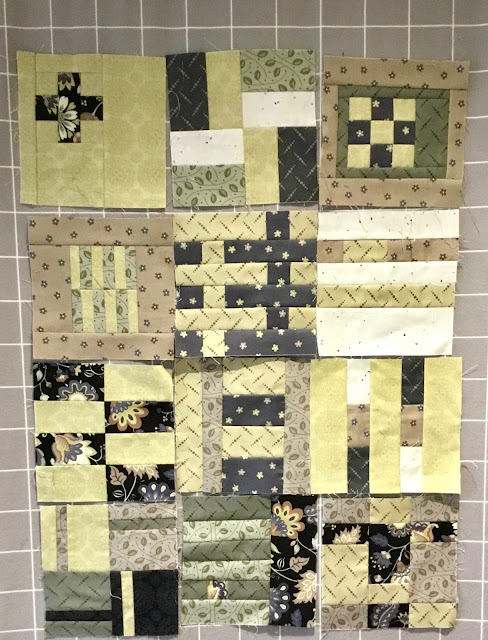 to go with the others.  Looking at them all together I realise I need to add more green, black. white, and grey, as well as the two new ones.  Can you tell I'm drawn to the yellowish colour?   I had to leave early as my husband was teaching and I don't like to leave my lovely girls Ella and Indi, my working type springer spaniels too long.  Honestly, sometimes I feel as if I'm on a piece of elastic, I leave home and I am having a great time, then suddenly, I am twanged back time up.

I can show you my stash bee blocks though, 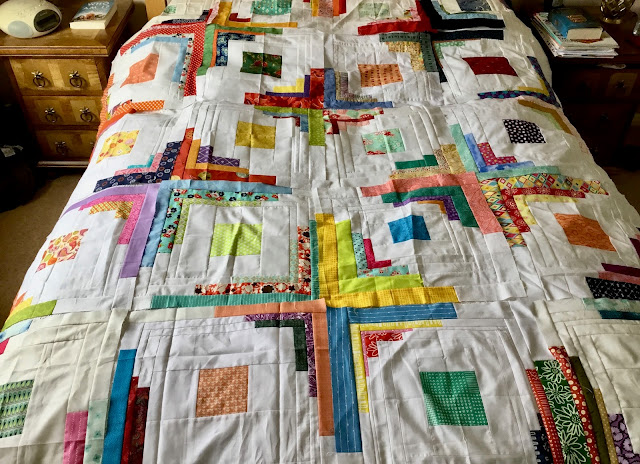 here they are all laid out on my bed.  It's not the final arrangement but you can see how it will come together.  What do you think?  I couldn't have got the same variety of scraps making it myself.  Isn't it funny that although we all have a stash they are SO different, different colours, styles and variety, some have an emphasis on subtle, some loud, some patterned and some plains.  Like life really, variety makes it so much more interesting.

Now about that secret project, no I can't show you, but I can tell you, it's for the 12 Days of Christmas in July blog hop hosted by Sarah at Confessions of a Fabric Addict that starts July 14th.  Would you believe there are over thirty of us taking part this year?  It is going to be such fun with two or three bloggers showing off their Christmas projects every day, I will be posting on Thursday 19th and I do hope you will visit and see my contribution.  It is my own design, no I am not a designer so you will just have to wait and decide for yourself, inspired or dogs dinner.  In fact I have done a couple of variations to the basic pattern too.  I'm quite nervous about it, it's like stripping off at a nudist beach I suppose ( I said SUPPOSE, I haven't ever been to one let alone stripped off), I will be exposing myself to the blogging world, scary.  You really want a sneak peak?  Well.......... 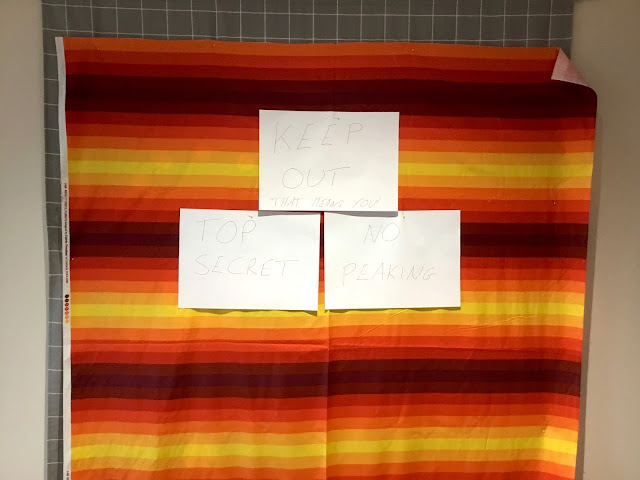 Can you read it? 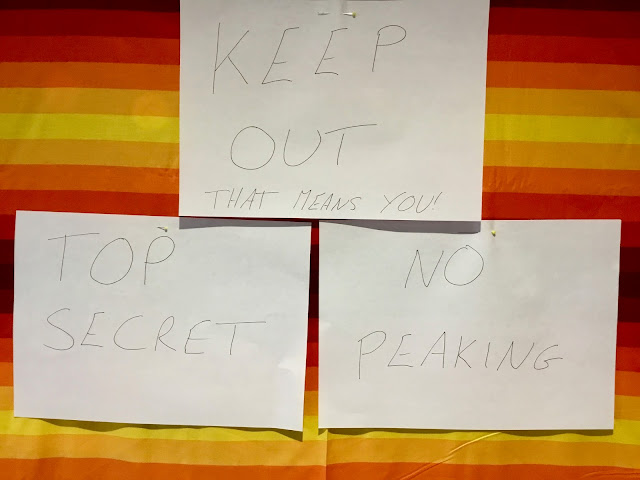 HAH!!!  You didn't think I would really expose myself to ridicule did you?  You just HAVE to come back on July 19th to see that.

But I will be back next week and I will hopefully have my little embroidery piece finished to show you as well as progress on my ongoing project, I showed you where I was up to last week.

So until then,
with smiles from,
Kate

Where I'm up to now

I've had very little time for quilting the last couple of weeks, but such is life.  I have made progress though, including my bee blocks and modern sampler blocks as well as circles of course. 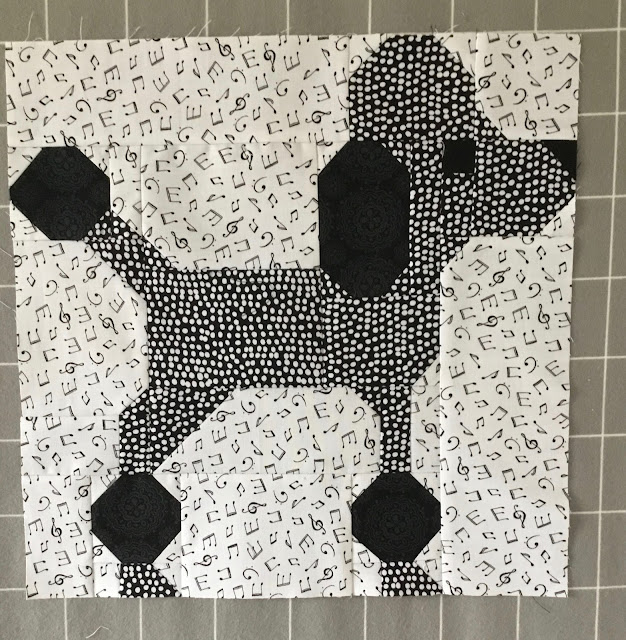 Meet Marcel.  Marcel is the poodle block requested by Karen from Tu-na Quilts.  It's not called Marcel of course but a couple of the girls have named them which I thought was rather fun.   You can find the Bee Inspired post here which has the link for the pattern but read Karen's subsequent posts where she has a handy  printout for labelling the pieces and gives post by post instructions.  There are a LOT of pieces, in fact that is what makes it one of the more difficult challenging blocks I have ever made.  I'm not sure if I enjoyed making it but I enjoyed the challenge,  I think.  It took me four sessions to make the block.  First one to cut the fabrics, then there were two to do the stitch and flip preparation (confusing at times even with the labels), and the last one to stitch the pieces together.  Karen requested black with white or white with black for the poodle and the background, I didn't have either so I had to hit the shops.  I did have a black on black for the accent fabric though, its rather nice but shame you can't see the detail.

The second one for Stash Bee Hive 2 was much easier, 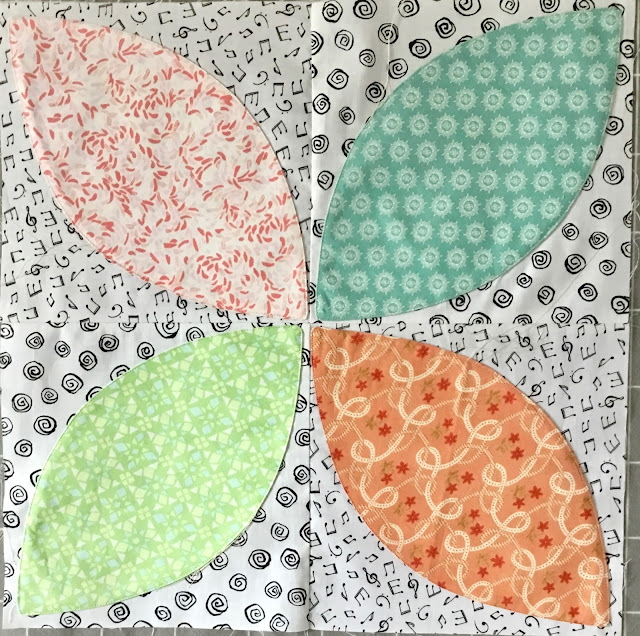 orange peel.  Although Lisa requested a white with black scrappy background she did say it would be acceptable if it was all the same.  I didn't have any white with black, but as I was already buying one fabric to make Marcel I splashed out and bought two.  This version is made using a bonded interfacing, I can see the advantage, it makes a nice neat edge and no chance of fraying but for me it is a little bulky, although I did use a light and very thin interfacing.  Orange peel is on my bucket list but this method is not for me I think, glad I tried it though.  That's the great thing about being in a bee, you get the opportunity to try lots of things without committing to the whole quilt.

I only made two new sampler blocks this month. 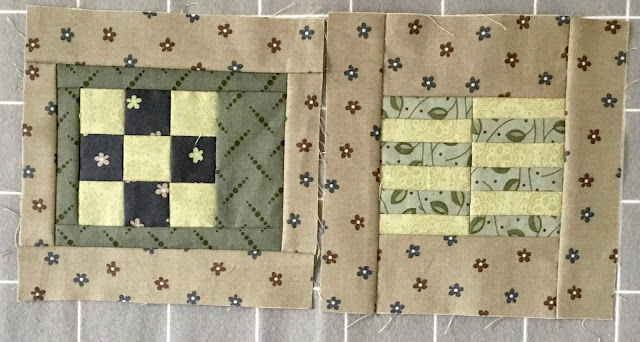 I added two new fabrics in, both from the same range, the grey and the light brown with tiny flowers. I'm really not sure about them, the brown I used as borders obviously doesn't work and needs to be replaced but the grey looks fine. 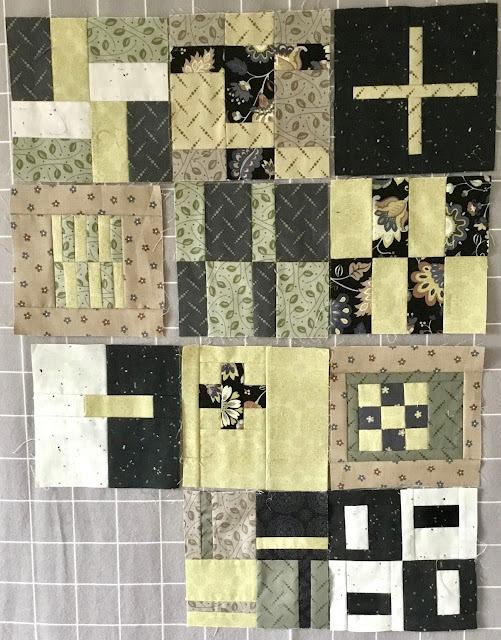 I was going to remove it but looking at it with the rest of the blocks it blends in better.  So, opinions please, do I remove the new brown completely, use it in small pieces, or should I remove both?  I'm not sure on this one.

Then there was circles 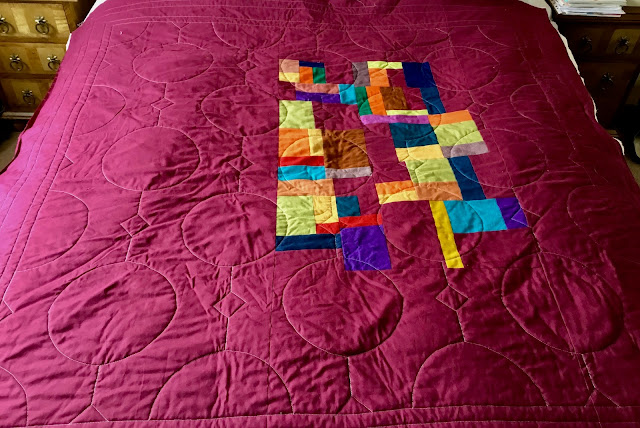 No I'm still not finished it and yes it is taking forever, but here is where I'm up to now, it's easier to see on the back.   I ironed the back before every line of quilting and although the fabric looks a bit loose on the pic when I iron it it does smooth out ok so that's what I will do before starting the next stage.   I went down each row of blocks going around the circles and diamonds, then I stitched around the borders and finally around the edge.  The plan now is to meander the background then do something in the circles.  I doubt if I will finish it this month though as I still have a lot going on just now.

Thank you all so much for your imput on my last post, there was a wealth of information in there which gave me much food for thought.

First of all Bonnie and several others appear to spray the wadding, now I always thought I was supposed to spray the fabric which is what I have been doing and which is what Margaret has read and recently seen on a craft channel, hmmmmmmm!

There is also a theory that it's to do with the grain of the fabric, Louise made some very good points

I find that I sometimes get that kind of wrinkling when I'm using my walking foot and the backing is lined up in a particular way. If the stitching lines go selvedge to selvedge, no problem. But if the quilting runs parallel to the less stretchy, straight grain, it can wrinkle. I think it doesn't happen on the front because there are more pieces, so the fabric grain is running lots of different directions. That makes the top more flexible and able to "go with the flow." And of course you can see any little tucks and puckers that are starting to form and fix them immediately on the top.

Louise also thinks a pieced backing helps avoid it, it is well worth reading all her comments.

Karen from KAHolly commented about a recommendation for heat setting whereas Karen from Tu-na Quilts says she never irons after spray basting and hasn't had a problem.

If you haven't read the post or commented early and are interested I would certainly recommend reading all the comments of the previous post, there is so much information there.

Lastly I finished the last of my embroidery and added the needs to this small piece.  I'm going to Higham Hall in a couple of weeks for a long weekend of embroidery and seeing as I haven't done any since I was last there I thought it was about time. 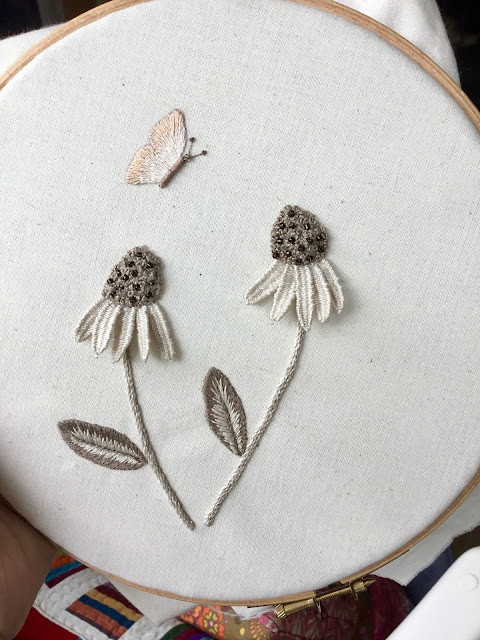 So here it is.  It's a small piece but it's amazing how much time it has taken to stitch it.   I quite enjoyed doing the silk shading on the leaves, the flower centres are padded underneath and covered with french knots, and I love the woven picots that make the petals.   All I have left to do is add a 3D leaf which is already made, and another two butterfly wings.   They are all stitched using wires and then cut out and attached.   I haven't done that before so I will finish it off in class. 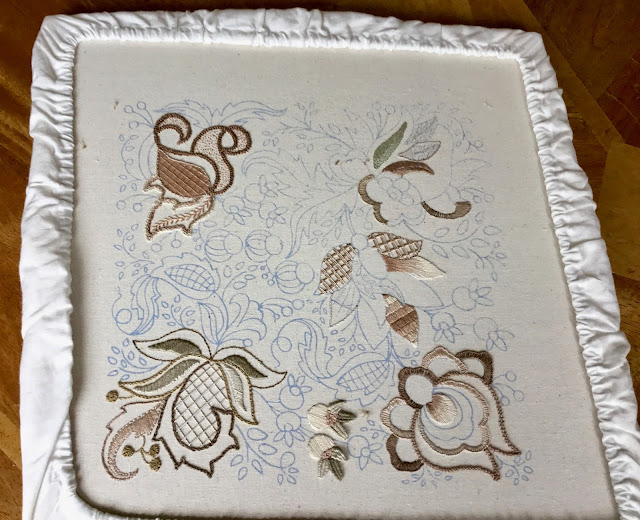 Then I will go back to this piece, which is really a tray cover.

Sorry I've been missing for a while, my son is much recovered now thank you for all your kind enquiries, but one of the parents has been ill, and quilting and blogging and reading blogs was the last thing on my mind.  Tell truth it will happen again, until eight months ago my husband and I were lucky enough to have four parents between us, now we have three, aged between 85 and 90 and all with health problems.  We are indeed very lucky and I count our blessings, no matter how much it disrupts our lives, every year every day is a bonus.

But today the sun is shining and I am now just about back to normal so I am back to blogging and will be visiting everyone in the next few days.  Thank you all so much for not giving up on me.

Until next time,
with smiles from,
Kate x

Linking up with:
Let's Bee Social
Midweek Makers
Can I Get a Whoop Whoop?
Finished or Not Friday
Slice of Pi Quilts hosting for TGIFF