Yes I know I've been gone for ages, but I didn't mean to, it just sort of happened, like most things in life.

I have been doing some sewing although admittedly not a lot, but I am doing a block of the month and I did a couple of other bits too.  Want to see what I've been up to?

Okay, the BOM I'm doing is the Sarah Fielke Coming Home Quilt, I expect you have been seeing pics from others who are doing it.  I was unsure of the fabrics to use for this one, I really wanted to use up some of what I had and as my brights phase has started to pass I chose to make this in more muted tones, Moda Grunge, as I already had a fair few. 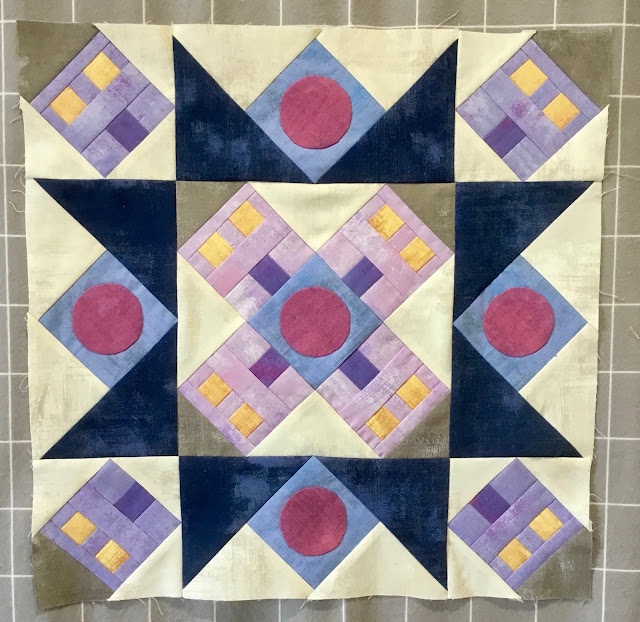 This is the first month. Actually it was my second attempt, I made one and didn't like it, or rather it didn't come out at the right size, I changed to another machine, a new to me one, and I just wasn't getting the seam allowance right. 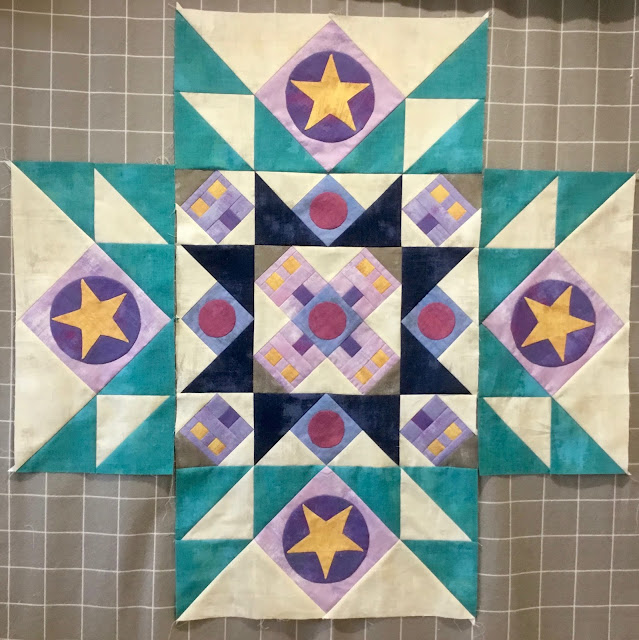 This is after month two, I'm happy with my colour choices up to that point and had plans to warm it up a bit.  What do you think?  Yes it is completely different to what I was doing the last couple of years but a change is as good as a rest and it will go nicely in the bedroom it's intended for. 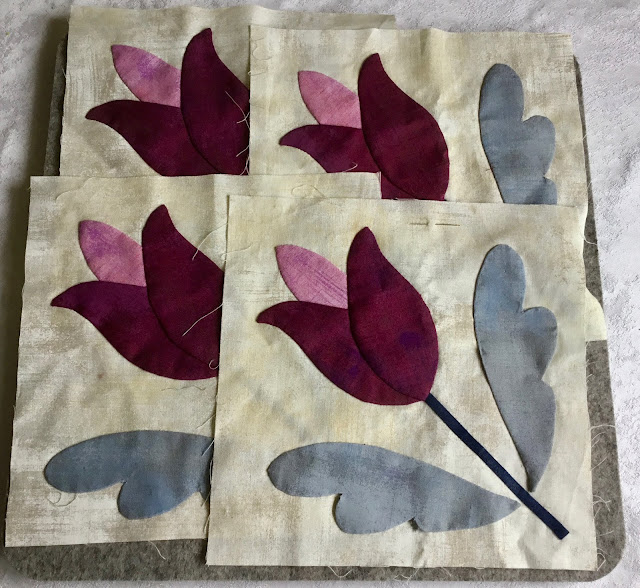 This is month three, not quite finished but only two leaves to finish the appliqué and then the corners can go on.

I admit I'm behind, I haven't even started month four and month five is due at the end of May, so I'm about a month behind.

I also made a couple of little changing mats for my beautiful little grandson, a DrEAMi moment brought on by circumstances. 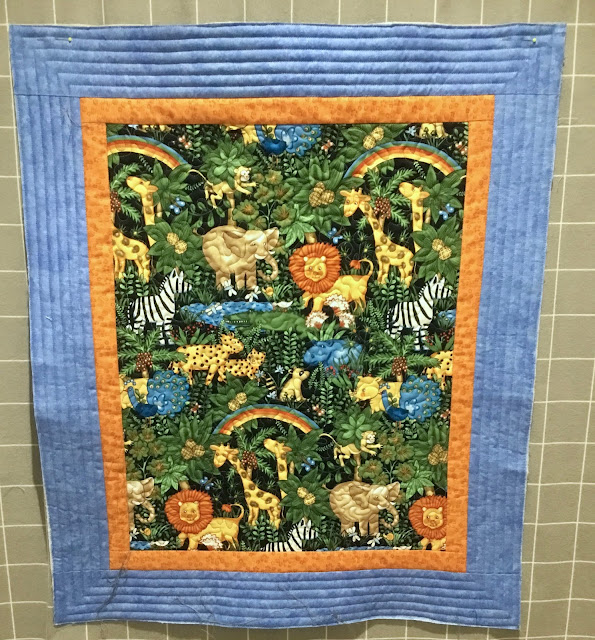 I made this one using fabric I already had leftover from granddaughters floor quilt.  It isn't bound in this pic but I think I used the blue from the second border. 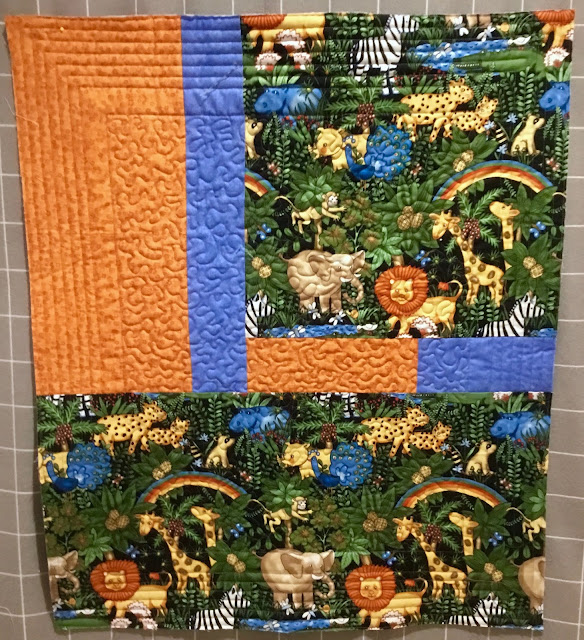 I must admit I prefer the back of the quilt where I used up the scraps, you can see the quilting better on this pic. 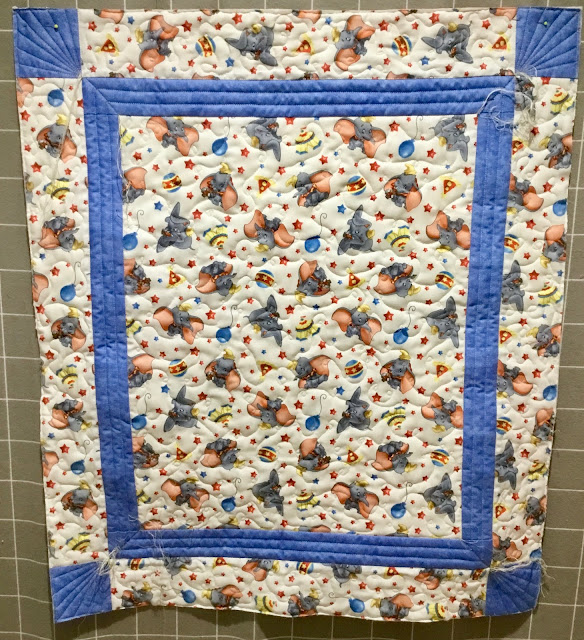 I found this fabric in a local shop, it's an older fabric I think but very current due to the release of the new Dumbo film.  I tried to be clever and do something different with the quilting in the corners but you wouldn't believe how much time it took me to sew in all the thread ends, you can see them all in the corners, I hadn't stitched them in when the pic was taken. I did the binding in the blue too but again I don't have a finished pic. 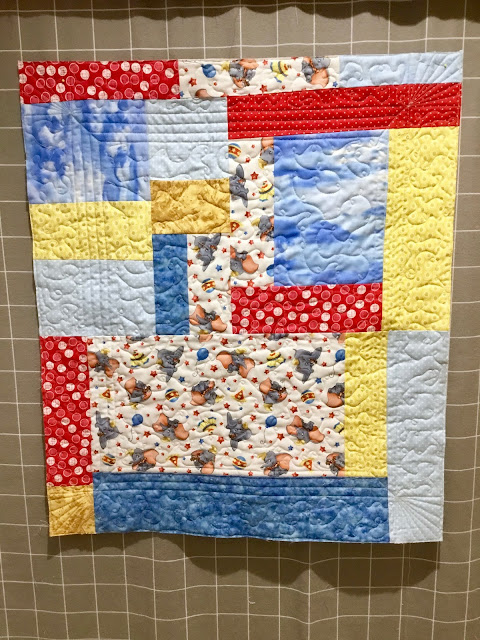 Another lovely back, well I think it's lovely anyway, I just rooted through my scraps and used up what toned in with what I had as I didn't have enough left overs.

But you haven't met my new grandson have you? 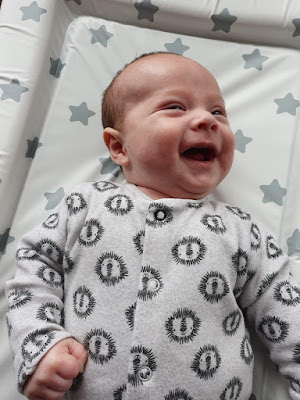 This is Asher Michael, born slightly early on March 4th, to the surprise of his parents, especially his Mummy who still hadn't stopped working at that point.  This is our little man at ten weeks.  I bet you smiled when you saw the pic, it's the kind of infectious smile babies have that you just HAVE to respond to isn't it?

I have another new arrival which was my birthday present from my husband recently. 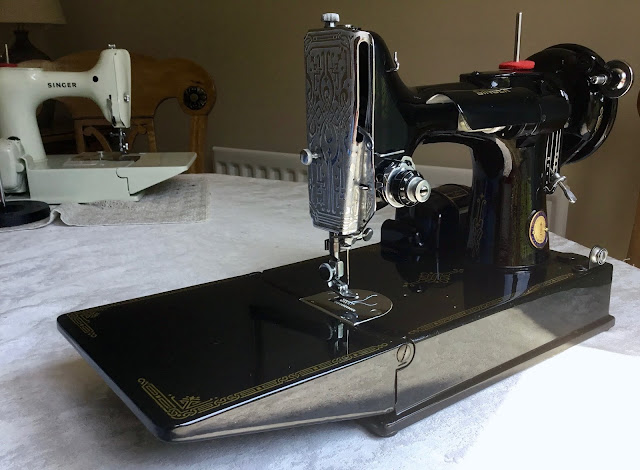 Meet my latest and yet to be named Singer Featherweight, a scroll face millennium commissioned October 1948.  Isn't she beautiful? She is in wonderful condition for a lady of her age and will be the last in my small collection.

Oh, I don't think I told you about the other two! I did tell you about Maggie in my last post, she is a 1952 black Singer Featherweight with a striated plate, she was my first, well I got a white one next, Bella, named after my paternal grandmother, she too is in wonderful condition and rated 9 out of 10 and no I haven't a pic to show you.  If you look at the pic you can see the third machine I got, a second white.  This was a bargain buy, although I didn't realise she had no case and not much in the way of accessories when I bought her from that well known auction site.  However, she has such a strong motor and just a few minor problems with her paintwork, all I had to do was have her main cable and foot cable rewired, change her belt, and give her a new LED bulb. Her name is Hinky Dink named after my mother, no that's NOT my mothers name, my mothers name is Doreen but she doesn't like it, neither does my sister as my Dad went out and registered my sister and gave her my mothers name instead of the name my mother had chose, which was Judith.  My mother was not a happy bunny I can tell you.  I digress, when I was a child and me or one of my brothers or sisters were say messy and dishevelled Mam used to say "look at you, you're like hinky dink what do you think".  She still says it yet to the latest generation, her great grandchildren.  So Hinky Dink it is.  Now I just have to wait until the inspiration hits me for little no name.

I did have another investment in my sewing, 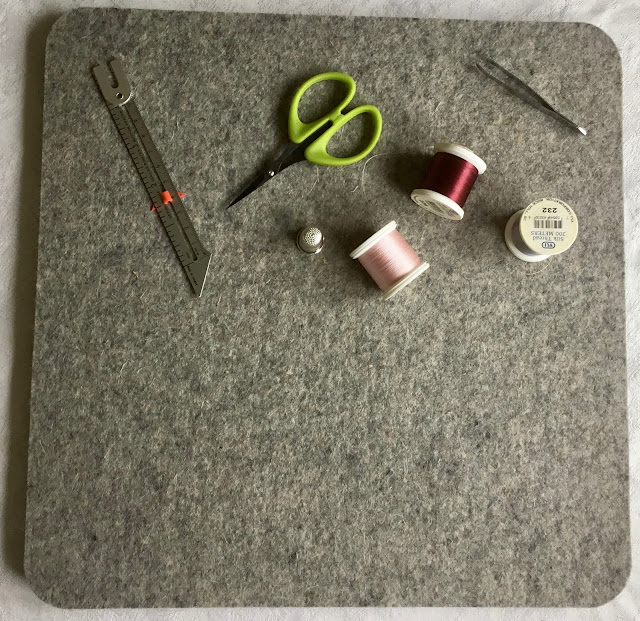 A wool pressing mat. I had been looking at these for ages but I just couldn't justify the high prices asked, do you know what I mean?  I read other people say they liked them but shillie shallied about the cost.  However, they were supposed to be great for appliqué and because I had signed up for the BOM which has a fair bit of appliqué in I eventually bit the bullet and bought the 13 1/2 inch version.  I have to be honest and say I have no regrets, yes it is wonderful at pressing appliqué, but what I really like it for is when I make half square triangles, or any seam pressing really. You know how pressing can distort a seam, especially on a bias? Well there have been no distortions pressing on this mat, my seams are so much better.  You know when you stitch long strips together and they bow? Although I haven't tried it yet I'm thinking it probably won't happen pressing on this, or not as much anyway, I must try it and see.
They come in lots of different sizes, I chose this size as most blocks I make are 12 1/2 inches or less but I know they come in 4 1/2, 8 1/2 and I think 12 1/2 x 18 1/2 inches.  I think there is a bigger one too but I'm not sure. for This one was more than I wanted to pay, but if I one day decided to have one for our holiday home I would probably buy the 8 1/2 inch one as that would cover most things even if I had to keep moving it to press it all, AND it is only half the price of the one I already have.

You know I feel so much better now I have finally made the effort to post, Janice at Colour, Creating and Quilting and Wendy at Pieceful Thoughts of my Quilting Life have been encouraging me to come back for a while, thank you girls, even though no one will probably remember me!!!

I will leave you with one more pic, 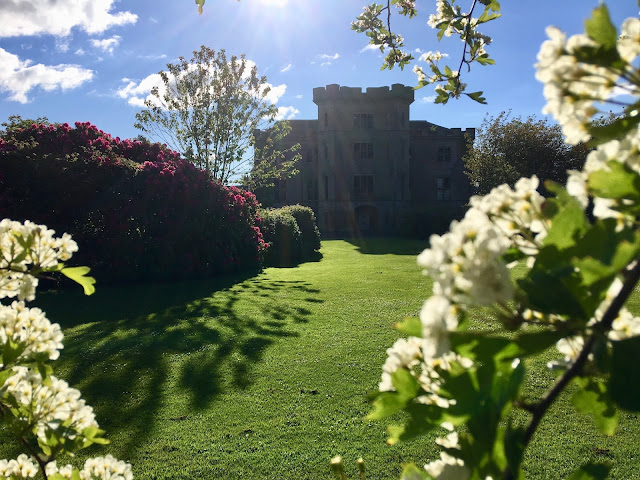 Barmoor Castle taken last weekend.  Just around the corner is one of the three ponds where the ducks, geese and waterfowl eggs are already hatching and I wonder how many signets the swans will have this year.  The castle is somewhat derelict but still beautiful and a wonderful setting for a romantic walk with my husband, if he had a romantic bone in his body that is, but a girl can dream.