It's a Beautiful World

Have you taken a good look outside recently?  I mean a good look, in detail.  It's such a wonderful time of year when nature gives us a last fanfare of beauty before the long winter sleep.  While it has always been my favourite time of year this year I can appreciate it so much more as I look at it through new eyes, well, one new eye so to speak after having the worst of my cataracts removed.

Thank you so much for all your good wishes and enquiries, I do so appreciate it.  I still have emails to reply to and blogs to visit, it is so lovely getting back to normal.

Oh the revelations, I couldn't believe it, I knew I was seeing everything as if through a dirty glass, that colours were dull as if the colours were being slowly leached out, but what I didn't know was the glass I was looking through was a dirty YELLOW.  Thats right, everything I was seeing had a strong yellow tinge, imagine what THAT has been doing to my colour vision.  Whites were cream, imagine, and it comes in so slowly you don't realise it has happened.  But now whites are brilliant, blues are so clear and beautiful, how didn't I realise I was missing all this?

The procedure itself was fine, I did a meditation all the way through and it didn't take long at all.  I just want the other eye done now.  Oh but I have to tell you, now don't laugh, one of my biggest revelations came when brushing my hair, in fact it came as a bit of a shock, I HAVE GREY HAIR!!!  Seriously, I didn't realise how much I had.  I knew I had some around the front and underneath, but my hair is peppered with it but the yellow tint made it look like light brown and blond hairs.  Yes I know I should have realised, you can't get to my age without getting grey hairs, it's a natural part of ageing, but as I don't think of my age often (who does) it didn't even enter my head.  I WONT be colouring my hair mind, I have strong views about all the adverts and the way the media encourages women to look younger and conform to stereotypes, at all ages, and I really don't like the idea of dousing my head with chemicals either, who knows what is absorbed into the skin and what effects it has.  However, I'm just spouting off my own personal opinion here so please feel free to ignore me.

So, first I'd like to show you the last bee blocks I made for Janice, Color, Creating, & Quilting. 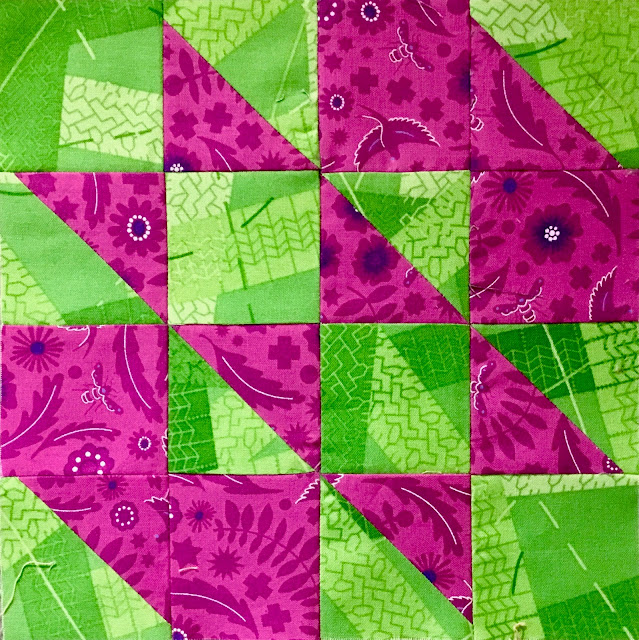 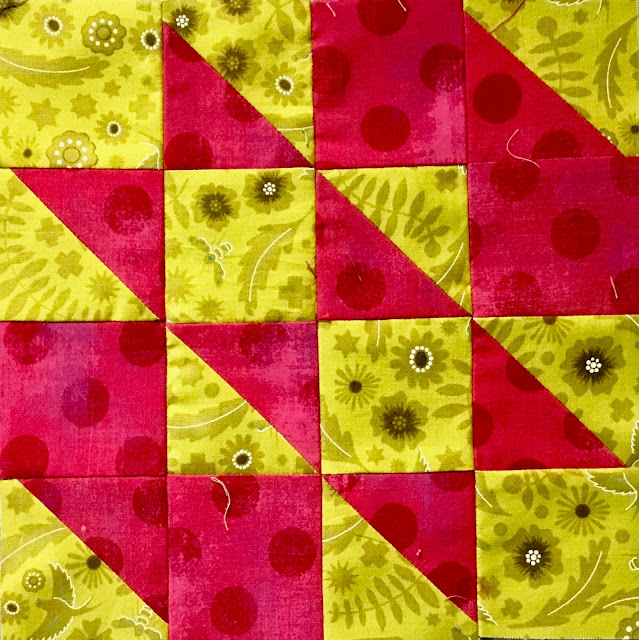 They are 8 inch finished, Janice asked for brights and that is what she got.  I even used some of my Gypsy fabrics, that's twice I've dipped into them, it gave me the shakes I can tell you.

Speaking of Gypsy you are way behind in my blocks so here is the update: 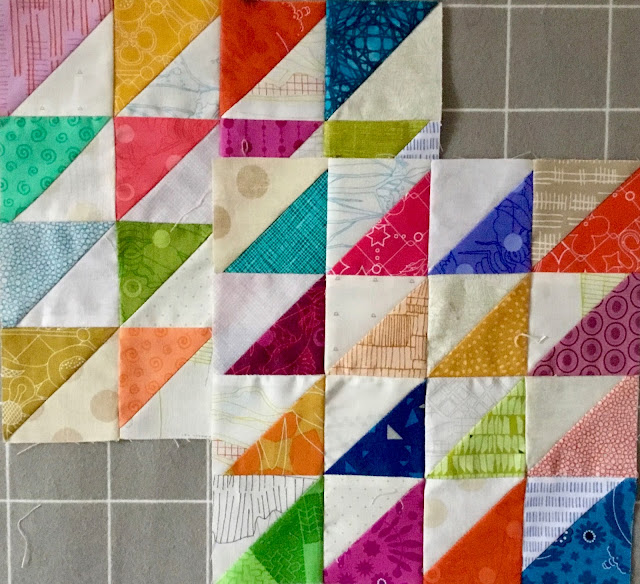 Two half square triangle blocks, I used some of the leftover triangles for these, none of the coloured ones are repeated over the two and I used sixteen of the background fabrics so it is used only once in each block. 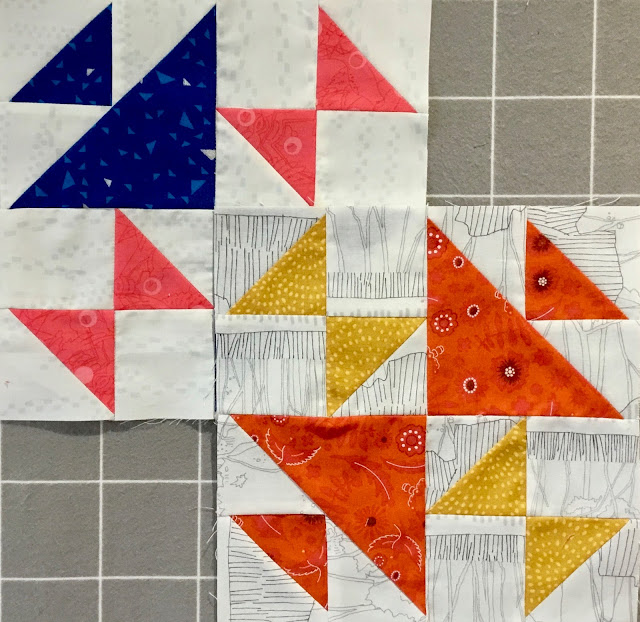 Old Maid Puzzle in two colour ways.  This is the last of the main blocks, the rest are classed as filler blocks, even though a couple are really quite big. 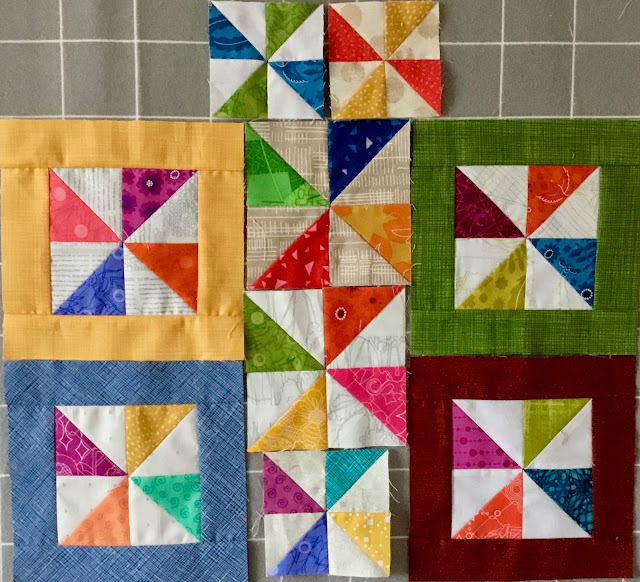 Pinwheel blocks four are bordered but I think I will change the border on the bottom right block, I've been laying the blocks out together and looking at them in the PiZap app and it doesn't look right next to it's neighbour. 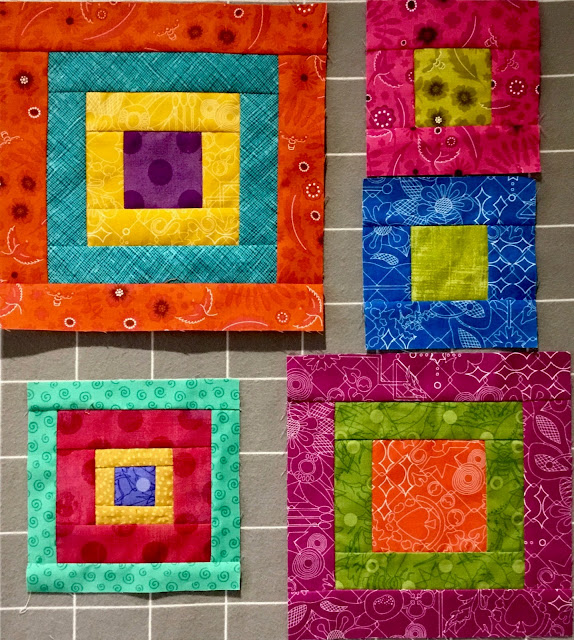 Courhouse Steps.  I may well replace the one on the bottom right, I really like it but I think it is next to a block of the same colour.

Want to see them all together? 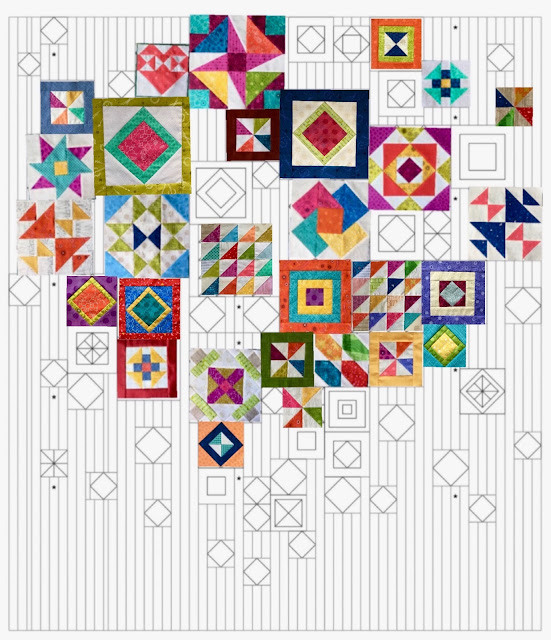 It's not all the blocks and it includes some of them you haven't seen 'officially' yet, but you get the drift.  Can you see the bordered pinwheel block near the top just under Crazy Anne?  As you can see it's next to a dark blue, I think if I leave it it will always bug me, but I will make the final decision as I put it together.

I had already made most of these before I had my eye done, I haven't been on the computer much and only for short periods at first.  I do have one problem with my eye though, well, not my eye exactly, my distance vision is fantastic out of it, only the cataract in the other eye has made the vision in that eye a lot worse, and my eyes just won't play together.  I can see much better wearing the old glasses but without glasses everything is just weird and it hurts my eyes too as they vie together to focus.  I go back end of next month for a check and I will ask for the second one done.  It wasn't planned as it is at an earlier stage, but I was told they may have to do it if my eyes didn't settle, and they haven't.

So, that's the last three weeks in a nutshell.  I have got some other stuff going on, one of the oldies is poorly in hospital again, this is the fifth time this year, they seem to be taking turns, but such is life and none of us knows what we have to come to, so I just count my blessings, and believe me when you look at them there are many.

Linking up with
Let's Bee Social
Wednesday Wait Loss
Midweek Makers
Can I Get a Whoop Whoop?
Anja Quilts hosting for TGIFF

It has been such a busy week here and I have several pieces of news for you, but first how about a pic? 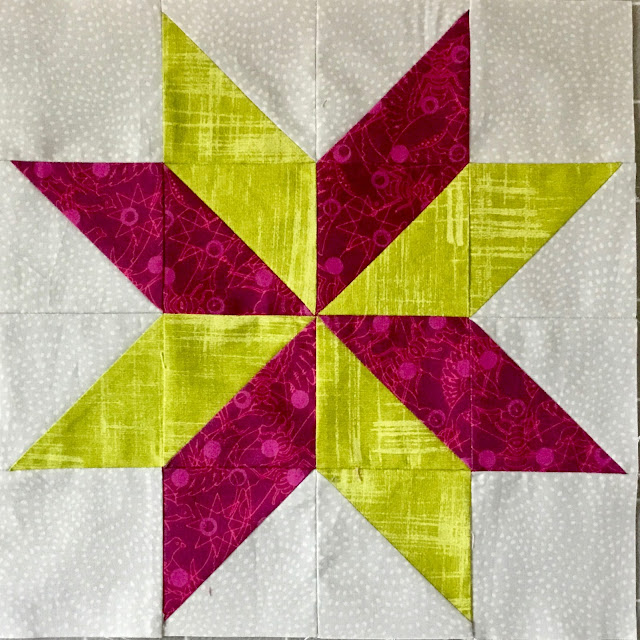 Jen from A Dream and a Stitch was Queen Bee for September in Bee Inspired, and this was her request.   Lemoyne star in our own choice of tertiary colours on a grey background.   Most of us had a lesson in colour here, did you know there are six tertiary colours, they are amber/marigold (yellow–orange), vermilion/cinnabar (red–orange), magenta (red–purple), violet/indigo (blue–purple), teal/aqua (blue-green), and chartreuse/lime green (yellow–green).   The colours are slightly skewed here but you get the drift.

Ok, first piece of news, Jack is out of hospital and doing quite well, especially as he is 90.  Thank you all for your kind enquiries. 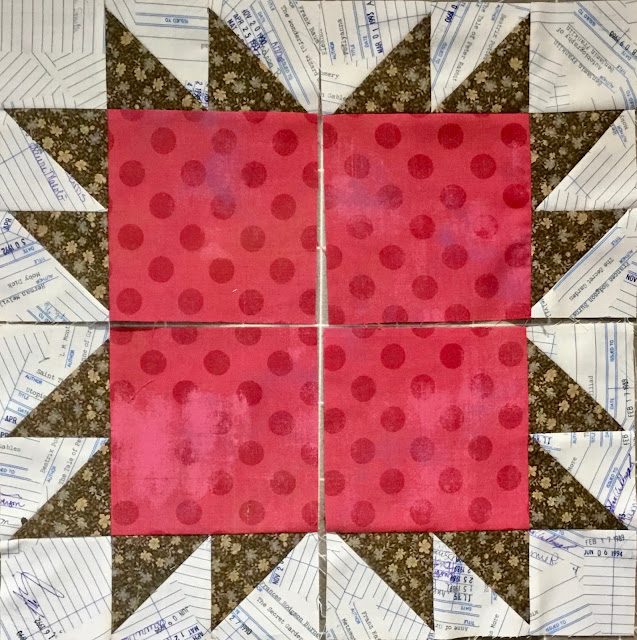 In Stash Bee Hive 2 our Queen requested Bear Paw, Jacqueline requested we make four quadrants the same colour so she can mix them up.  I love this Mode Grunge, and she did say think raspberry!

Second piece of news, I finally left work last week.  I meant to tell you but I forgot, I had my last day last Wednesday and so far my feet haven't touched the ground.   It was my choice to leave and it's permanent, I am taking early retirement.   However, coming to my next piece of news I will spend a lot of time at home this month as I won't be driving, that's because today, Thursday, I have cataract surgery.  As I am scheduling this post for 8am if you are in the UK I am already at the hospital, and if you are in the USA it will be over by the time you get up to start your day.  I have been struggling recently as my sight deteriorated, do you know the worst thing?  I can't see colours properly, everything gets washed out.  I'll let you know how I get on next week, as long as my eyes work together properly, the cataract has made the sight in one much worse and there will be a big difference between my eyes.  I don't know when I will be sewing again, but not in the next couple of weeks anyway.  Good job I have some stuff secreted away to fill the gap.

Gypsy?  Who mentioned Gypsy?  I am several weeks ahead fortunately, want to see last weeks block? 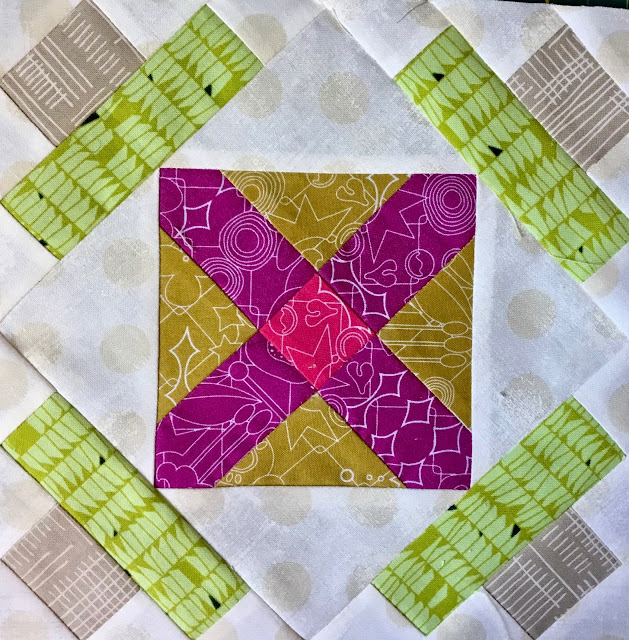 Nurses Cross, like it?  A tricky little block but easier than I expected.  A lot of people in the sew along have paper pieced it but as paper piecing is not one of my best skills I just do basic piecing and keep my fingers crossed.  As with all the blocks it's a matter of keeping a very scant seam and not trying to rush it.

Now I want to make sure you have all read about a wonderful piece of news that isn't mine.  Cheryl Brickley from Meadow Mist Designs and Paige Alexander from Quilted Blooms have wrote a book together.  Modern Plus Sign Quilts is due to be published in February 2018 and is available for pre order now.  I have already ordered mine, this is so exciting!  I'm sure you all know Cheryl from her wonderful free quilt alongs, she is the most wonderful designer and so generous, she makes a wonderful contribution to the quilting world.  I first met Paige just a few weeks after I started blogging, she started about four weeks before me so we clicked right off, she is also in Bee Inspired our own quilting bee.  I couldn't believe how professional Paige's blog looked and it got better and better.  Paige is so talented, the quality of her work is wonderful, and she has already had several of her patterns published.  With two such fantastic and talented ladies this has to be the must have book for 2018.  I suppose I'd better remind you at this point I don't do affiliations, I tell it as I see it, end of.

I WAS going to show you this weeks Gypsy blocks but I haven't taken the pics yet, sorry, and my design wall is full, and no I'm not showing you it, there is stuff I'm keeping secret on there.

What I can tell you is that my 12 days of Christmas in July post is now my most viewed post ever.  If you are new and missed it do check it out. 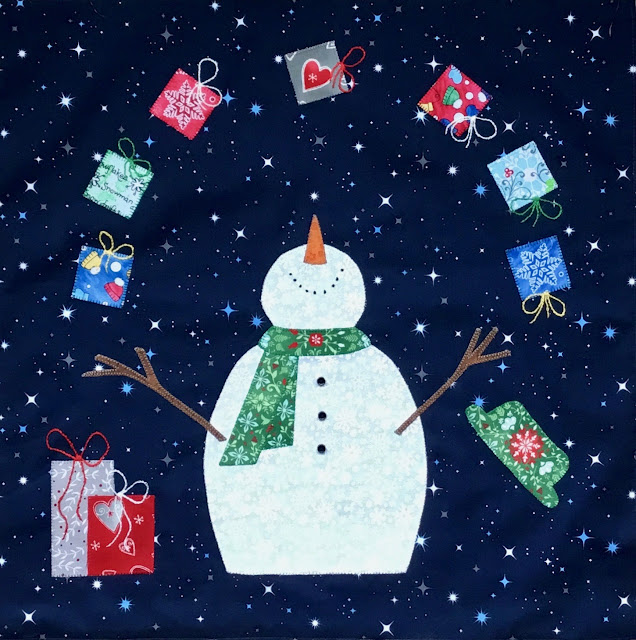 I'm so proud of this I have to give you a second look.  This is one of three variations, an 18 inch cushion design which can be adapted for other items such as a table runner or wall hanging.  The post includes a tutorial and a link for the templates, if you make anything for them I would love to see a pic so I could feature it on the blog, it would give me such a thrill.

Have a great week, whatever you are doing.

Until next time
With smiles from
Kate x
Posted by Kate @ Smiles From Kate at 08:00 13 comments: