Surprising isn't it? Two posts in a month, I can hardly believe it either. Progress has been made though, in more ways than one, although I still haven't got a finish to show you. Getting closer though.

I started the improv panel for the confetti quilt I'm making, that's what I'm going to call it, partly because a couple of you described it as such last time, which made me think 'yes', it's made from the leftovers from the wedding quilt, and the autograph panel at that, so 'Confetti' is the perfect name. 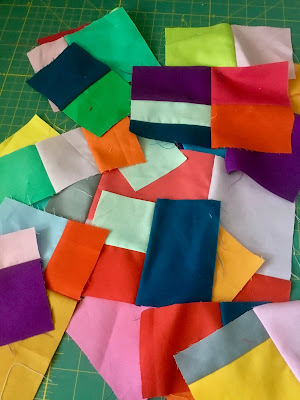 and started stitching them together. I added some other scraps in leftover from my still unfinished Postcards from Sweden. 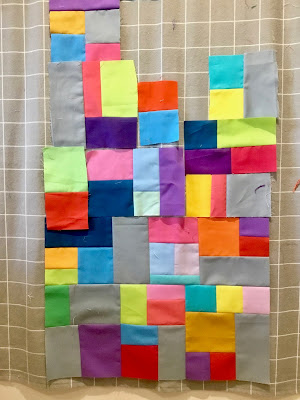 I started stitching them into blocks, then strips. I added in some of the grey I was using for the back as I didn't want it to look just a solid piece of colour. 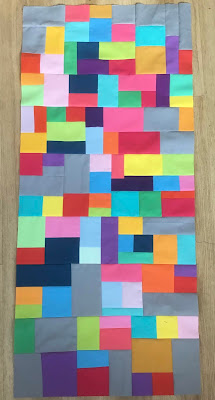 This is what I finally ended up with, not exactly how I envisioned it but it's ok, and it meant I could add a strip of grey to the top and bottom and insert it into a standard width of fabric. 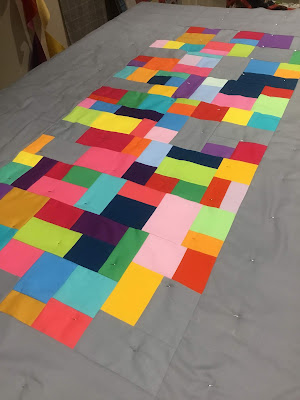 This is how it looks now when layered and pinned on the table.  Want another look at the front? 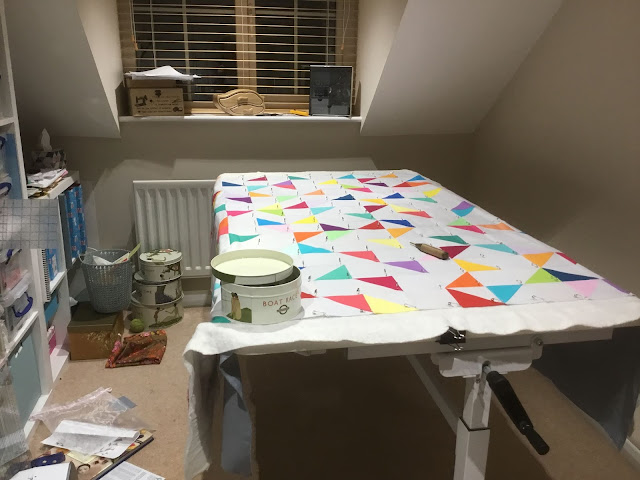 Here it is on my lovely Horne table which goes up and down and so is easy on the back for basting. Can you see what is on the floor? Apart from the mess of course, it's a tennis ball, one of my dog Indi's, she has emergency tennis balls hidden all over the house but I didn't notice it until I viewed the pic. Have you noticed how narrow my room is? I usually have the table against the wall, I have to be careful when I'm basting, I have been known to crack my head on the sloping ceiling. The room is a bit longer though. 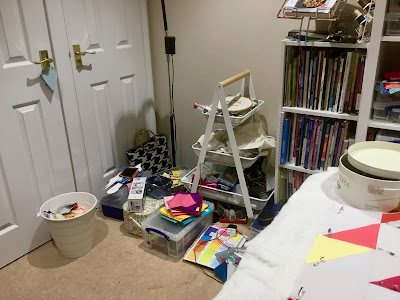 That's the rest of my workable space, with more mess on the floor, it's difficult when I need the table. So, where is my machine? 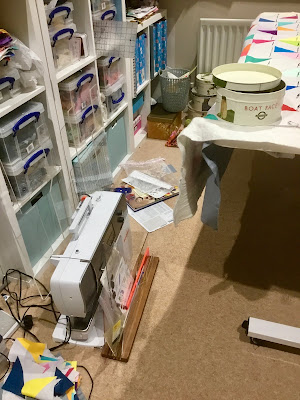 That's relegated to the floor too, there's nowhere else to put it. It is heavy to move though. 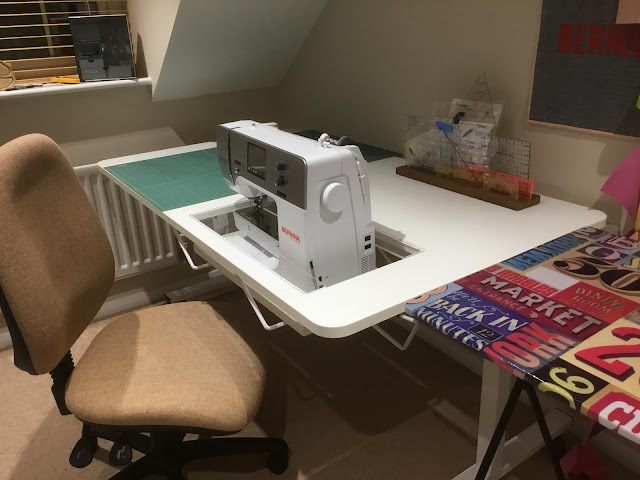 That's better, nice and tidy again. I have a large cutting mat to the side and a little folding table I can use for my wool pressing mat and iron when I'm piecing, or at the other side to form an L when I'm quilting, I adjust the hight of the table and chair for whatever I'm doing at the time.

I did have a bit of an accident because of the lack of space though Just before Christmas I was doing some cutting, and you know what it's like, you move stuff. In this case it was my big Creative Grids ruler, with the non slip dots on the back. So where did I put it? On my chair. Then what did I do? Oh yes, I sat on it and broke it. I was devastated. THEN when I went to order another one I nearly fell off my chair, the price of them WOW! With postage it wasn't short of £30 So I went looking for alternatives and I found one, I shilli-shallied, should I risk it? I did and ended up with an 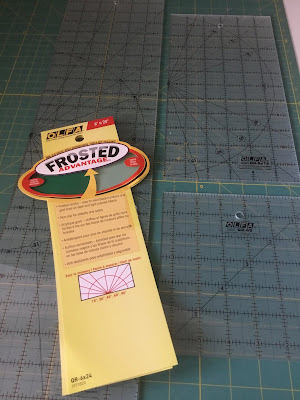 Olfa frosted one. I have to say, I didn't think I would like a ruler better than the Creative Grids but I do, this one is at least as good and I actually prefer it. The Creative Grids one used to slip occasionally but this grips the whole of the fabric and doesn't seem to slip at all. As my husband bought me the large one I treat myself to the 6 x 12 small one and the 6 1/2 inch square too. As long as the frosting doesn't wear off the back it will be fine, it was just two thirds of the price and no postage. I did like the size of the other one though, it was 24 1/2 x 6 1/2 and I do like the extra 1/2.

I'm now doing the actual quilting bit but I haven't any pics to show you yet, I am keeping it quite simple though. Even so it's taking ages and I now have my fabrics for the front of the wedding quilt and I can't wait to start cutting it out. I say I now have them, I got them but some seemed to be too pale. I ended up buying more, that's the problem with buying online. I wouldn't mind but I used a Kona colour chart too. Anyone else find the same?

So that's it for today, you never know though, by the time I post again I may even have a finish. That's if I have enough for my binding that is, I didn't have the sense to check it out before I put my order in!

Until next time,
With smiles from,
Kate x
Posted by Kate @ Smiles From Kate at 16:08 13 comments: