First of all thank you everyone for your so lovely comments last week.  To be honest I was moved to tears by some of them and they evoked such poignant memories.  The first time I found out I was having a baby was early December,too many years ago, my beautiful daughter was born the following July, then three years later I had a Christmas baby born December 18th.   My third baby was an Easter present born a few years later on Easter Monday.  But I was a little confused by some of your comments. 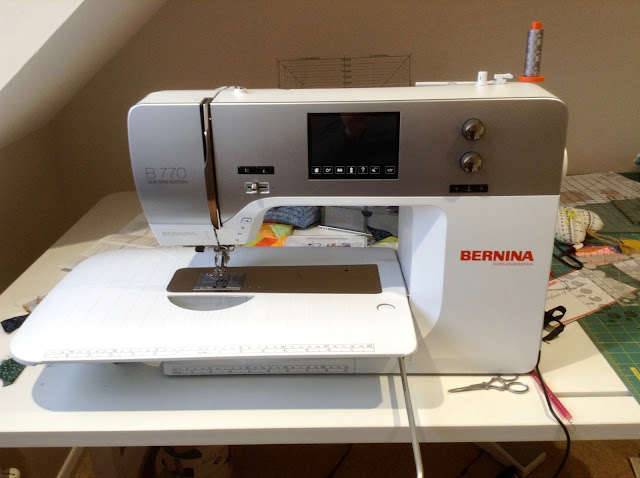 IS HERE!!!   What do you think?  Isn't she lovely, all shiny and new, my Bernina 770QE.  Like her?
She has a 10 inch throat and a 9mm stitch with.  She comes with a straight stitch plate and the Bernina Stitch Regulator.  She also has the new Bernina Hook and the bobbin in 70% bigger than normal, AND she has the Bernina Dual Feed, so I don't need a walking foot, although I do need the special feet but some including a quarter inch foot came with it.
She is a huge investment for me, Gary was so shocked when I told him how much she cost, although I got £200 off as a show special.  Would you believe he couldn't remember me talking about it?  As if I would make the decision to spend so much money without discussing it with him, even if it was my own money.  Now if we had been taking football, meditation or his upcoming book he would have been able to quote me word for word.  I didn't take the decision lightly, I thought about it and talked about it for months before, I love my Bernina 440 and I had to make sure my new machine had everything I would ever need, I think this one has.

I'm sorry, actually I really am, I was so moved by the comments, I almost wished things were different and I wasn't misleading you.  But there again I didn't fancy going in for the title of worlds oldest Mum.  And I haven't had any fun since my Bluebell Woods posts.  Should I tell you about my best ever tease?

Hehe, it was my husbands 50th birthday coming up, he has a reputation for guessing his gifts, he does it so often and it takes all the joy and surprise out of giving, this time I wanted to surprise him. Sure enough he started quizzing me about his birthday present, I just said it was something he always wanted,  and after that I just said ‘ask me no questions and I’ll tell you no lies’. Something he always wanted?  He started quizzing, my son, his daughter, his parents, my sister, then went on to friends and employees. He had it in his head he was getting a dog?????? I never said dog, all I said was his present wouldn’t be at home on the morning of his birthday as I had arranged for it to be delivered. The closer is birthday got the more concerned he became, he rang the vets and checked out vaccinations for his 'puppy’.   The day before he got the vacuum out and vacuumed his office for paperclips and elastic bands, we were shocked, we didn’t know he knew what a vacuum cleaner was for.   A customer came in and he told her about his birthday the next day and how he was getting a springer spaniel bitch liver and white and he was calling her Ella, after Ella Fitzgerald. He even consented to her bringing her son at the weekend to see his puppy. Gary went to work on his birthday, I stayed home for the delivery, his parents came over for a birthday meal and arrived before him, his present was quiet in the corner. As he came to the door his Mum put her hands over his eyes so he couldn’t see, and as he came in his Dad pressed the button, and his new electronic piano played ‘Happy Birthday” to him. Oh I got him good, he couldn’t even sit on the seat and play it for twenty minutes. The thing is everyone knows what Gary is like, and EVERYONE, except the customer, was in on the secret. It was so funny. Five years ago he eventually got his liver and white springer spaniel bitch named Ella, and guess what? Ella decided she was my dog, and that was that. We now have another, Ella’s half sister Indi, black and white instead of liver and white, I chose the name but she is Gary’s dog, Ella makes sure of that!

Moving on I've been playing, not a lot, I haven't had much time, but just to get the feel of her first before I had a serious look at what she can do.  (Tell the truth I don't know how most of it works yet either). 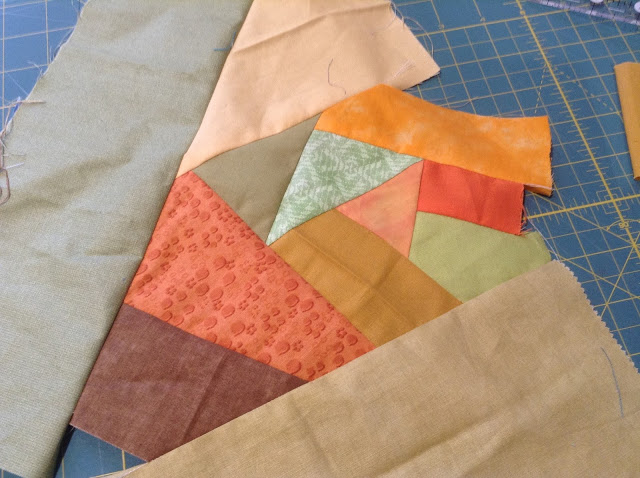 So I decided to 'make' some fabric with scraps.  It was harder than it looks, there is the temptation to add bigger and bigger pieces.  This needs more thinking about.

I did start doing Decembers Meadow Mystery instructions though. 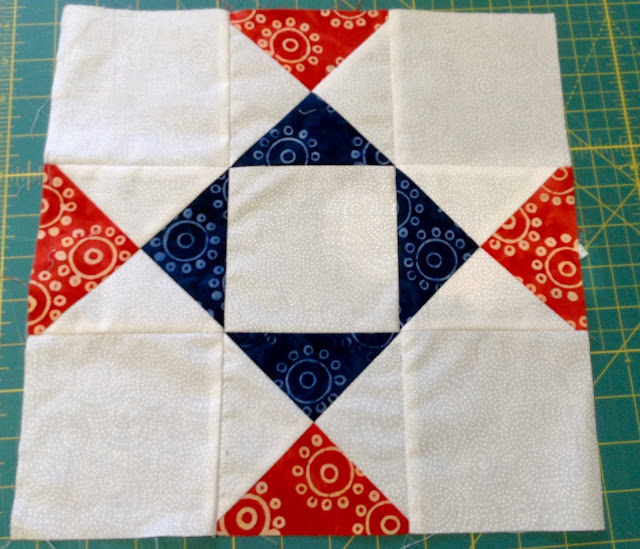 But I had a bit of trouble and this is the only one of nine I have finished.  I wasn't happy with one of my joins you see, I unpicked it and re stitched it three times until it was perfect, then I realised I had put one piece in upside down.  Time for a three minute breathing space before unpicking it and doing it again, perfect.  You would think that I'd quit while I was ahead?  No, I started on the second block, I got six stitched together.........and I'd turned one piece around 90 degrees, that's when I gave up.  I'll let you know when I have the courage to get back to it.   Sometimes it just isn't your day!

I must say though with my new machine and using the quarter inch foot and straight stitch plate which is in imperial measurements my seams have much improved in consistent accuracy.  I also did some more secret sewing, it was tricky, but it's turned out lovely, except of course I can't show you, yet! 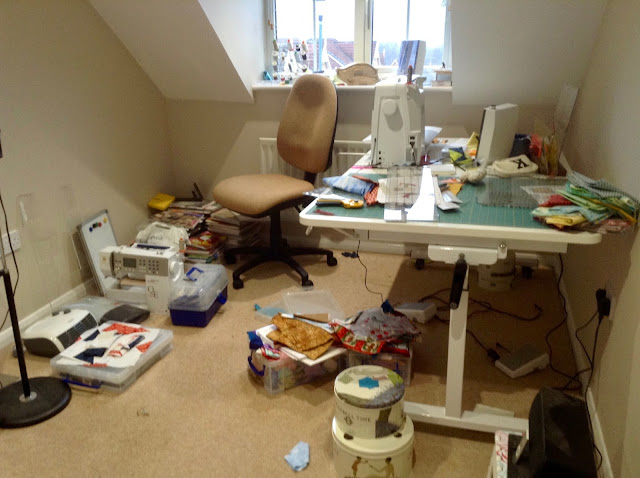 It did need a lot of fabrics though and I had to pull a lot of stuff out before I was satisfied with it, I made a bit of a mess............ (Shhhhh I tidied up before I dared take this) 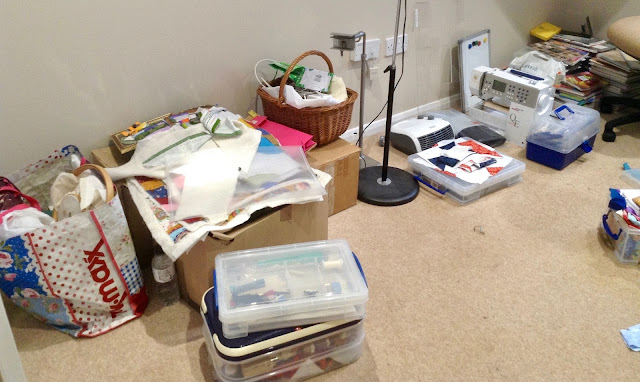 Neither is it helped by the fact that although I have my perfect table and chair and my beautiful new machine I still haven't got any storage.  So the books are still piled up in the corner and I still have cardboard boxes and bags on the floor.  Most of my fabrics are in big boxes under the beds, some are on a shelf in a wardrobe.........  Only I've spent my budget so I need to save some more first.  Unless I can con  persuade my lovely husband to help me finish it off that is :-)

Before I go I have some other news, I have a place in Stash Bee next year, oh yes time for a happy dance.  If you don't follow Stash Be I suggest you check it out.  It is quiet just now as the 2016 Bee Groups are ending, but just wait until January 1st when the Bee's start buzzing'.   I'm in Hive 2 and my month is February, so, as I am so slow, I had better get choosing and planning now.  But one things for sure, whatever I chose I will tell you all about it.

'till next time
With smiles from,
Kate

Linking up with:
Lorna @ Let's Bee Social
Kelly @ Needle and Thread Thursday
Anja @ Anja Quilts hosting TGIFF
Sarah @ Can I Get a Whoop Whoop?
Myra @ Finished or not Friday