Well now, this is a great start to the year isn't it?  For all my procrastinating how I was going to get back to posting on my normal day, first week of the year and I am late, can you believe it?  Well, life happens and people are more important than blogging which I'm sure you realise, but that's just life.

Moving on, I hope you have had a wonderful Christmas and New Year, all the fuss and planning and it is over in a flash.  I did a round up of my Best of 2017 last week, you may have missed it as I didn't share the post at all,  but even though I felt I had had a bad year for quilting I was surprised to find I still had one or two nice finishes, and another couple I didn't include too.  I am hoping this year will be blistering and so I have set my goals for 2018 which I posted just before Christmas but if you missed, you can find it here.

The thing about goals is you need to break them down into manageable chunks, so I have made my small goals for this month, which are:

1. Make 61 blocks for Tina's wedding quilt.  I am making this my One Monthly Goal for this month.  The wedding is February 2nd and I finally know what I am doing but I need to buy some more fabric.

2. Make my Bee blocks for December and January and mail them by 12th January.

3. Cut out my secret quilt.

Yes that's all, these are my priority, I hope to get more done of course but this is my have to list.

The good news is I have got off to a good start by making one bee block and I am a good way through the second. 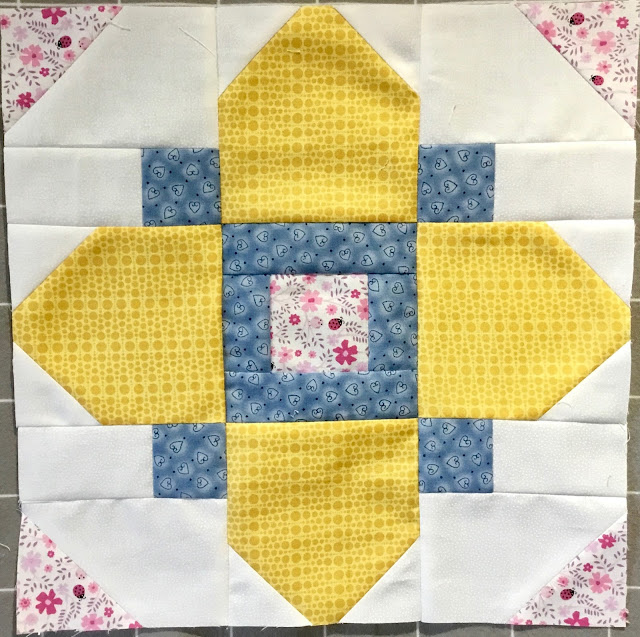 This is actually Januarys block, the Quatrefoil block for Sharon at Yellow Cat Designs.  You can see her request post and a link to the tutorial on the Bee Inspired blog post. 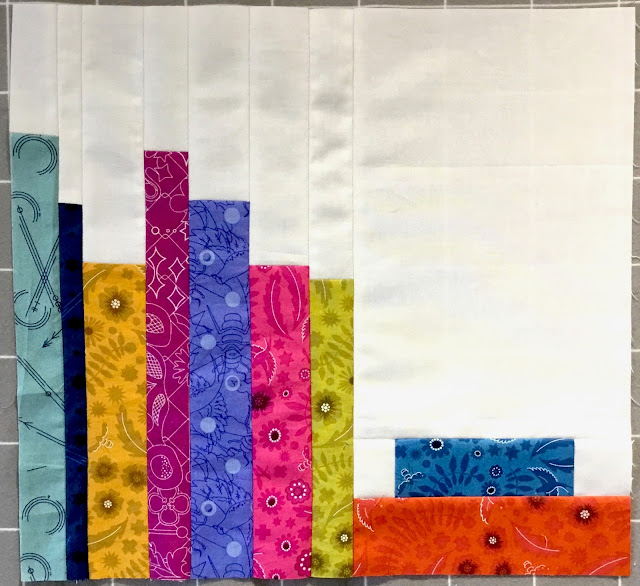 Decembers block is a Bookshelf block for Emily at The Darling Dogwood and there is a tutorial  on the  Bee Inspired blog.   I did mean to get this one made early but things didn't work out, then I decided to make it over Christmas and mail it first thing in January after the Christmas post, but I couldn't sew until a couple of days ago.  You may notice there is a lot of space on the right of the block, that's because it's not finished yet, there is an item to be added there.  What is it?  You will just have to guess, if you know me well you might get it...........
Tell you next week, in fact I should be able to show you. 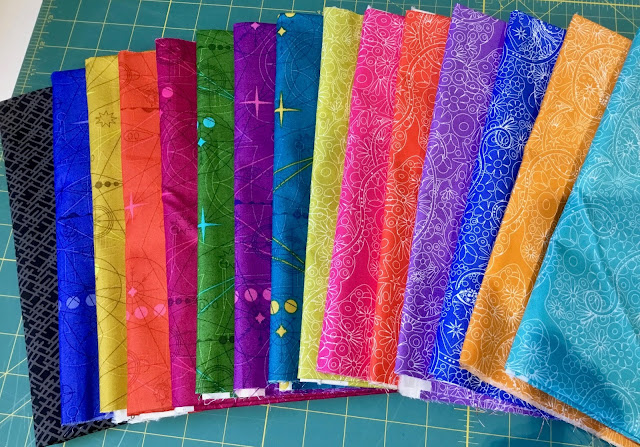 Alison Glass Sunprints 2018.  It's not the whole range but it is my favourites, I wasn't so keen on the design of the others.  Why?  To me they are solids with a small occasional squiggle on and to me you may even loose that when you cut them up.  As solids are cheaper to buy than prints I have decided to skip those ones and just buy the ones I like, after all, liking a range doesn't mean we have to slavishly buy all of it does it?  The grey one on the far left isn't a sun print of course, it's a Moda Muslin which was half price, and as I have very little grey I couldn't resist half a metre.

Going back to yesterday I was expecting the fabrics from Simply Solids but when a parcel came it was much smaller than I expected, and I opened it to find...... 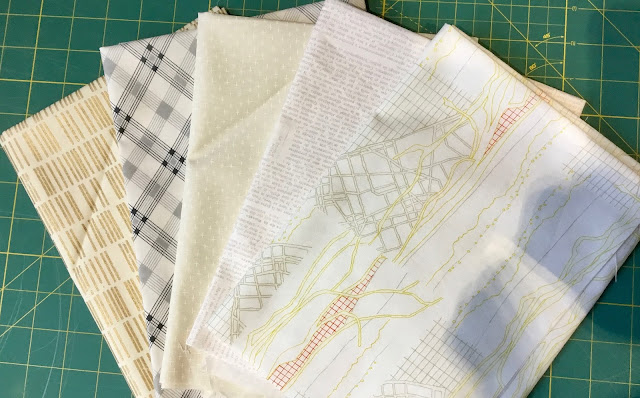 Five low volume fat quarters.  Back in April I took out a subscription for low volume fabrics, I received my parcel every month then after the October payment was taken I received an email from the payment company saying my monthly payment had been cancelled.  I thought it was for a year but assumed it was six months and a couple of weeks later my last bundle arrived.  No more money was taken, no fabrics came in December, so when I received yesterdays parcel I was confused, it was too early for a January delivery and I hadn't paid for any more fabrics.  I rang Simply Solids and explained the situation, I couldn't keep fabrics I hadn't paid for.  They hadn't cancelled my payment but the payment company had, they couldn't understand why, there had never been any problems.  I decided not to continue with the subscription, I have a fair few low volume fat quarters now and would rather self select, maybe in larger quantities in future.  I did offer to pay for the ones I have received though, I told her I hadn't paid for them, but she refused payment, it was their mistake and she didn't expect me to pay for them.  Wasn't that generous?  Being honest paid off.

Sorry about the poor pics this week, it is so dull just now it's hard to get a decent shot.

Thank you all for your kind enquiries about my second cataract op, it took place on December 21st.  That is the reason I haven't been sewing, unfortunately it didn't go as well as the first one, there were a couple of issues I won't go into and my sight has been very blurry.  Fortunately it is now much improved and I have an eye test in three weeks just before I see the consultant again.  Thank goodness for Poundland readers is all I have to say, I wouldn't have been able to see anything close up without them.  I am hoping to get caught up with my emails in the next couple of weeks so if I haven't replied to your comments yet my apologies.

So, that's all for my first post of the year, planning and a little sewing.  It's my first sewing group get together of the year on Saturday, I haven't a clue what I can take so I need to have a little rummage and a little think, I'll tell you what I come up with, and hopefully show you the finished bookshelf block, next week.

Linking up with:
Can I Get A Whoop Whoop?