What Happened to the Rejects?

After a manic week work wise which included me catering for a weekend event which included, not only several vegetarians but three vegans, I now have the painter here.   It is impossible to sew, I am camped out between my bedroom and the kitchen.  I had to empty the bookcases in the dining room and carry all the books upstairs into the spare bedroom, then there was the pictures from the dining room and the lounge and all the bits and pieces, good job I prefer it a more minimalist look.  So this is what I held back from my post last week.

Just to recap I showed you the block I designed, Barcodes. 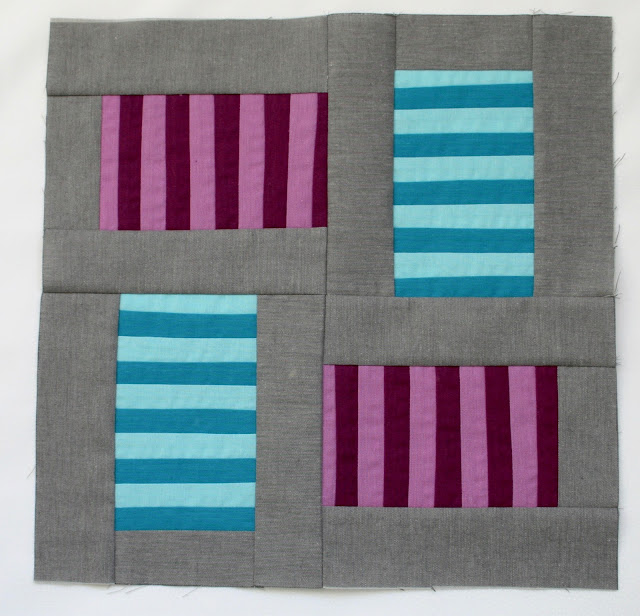 And explained a bit about the process with a pic of my rejects including....... 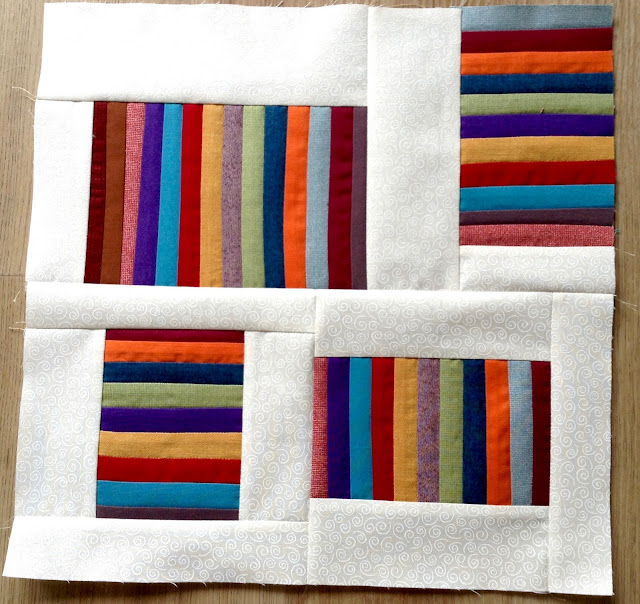 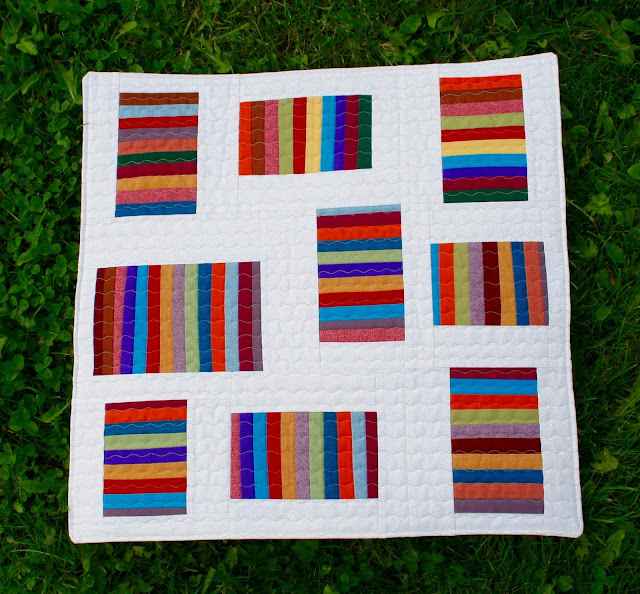 I salvaged it, by adding five of the block units, the ones at the top and right of the pic, and made it into a cushion (pillow).   I had to change the right middle one so it would fit in.  There is still a unit that is on the large size, but I managed to disguise the one on the edge which is now the middle block. 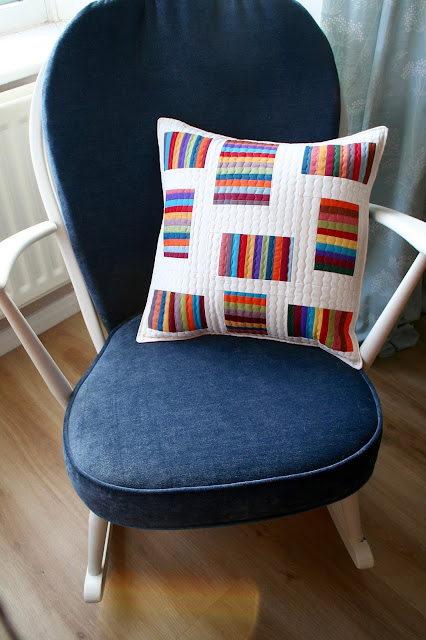 Slightly unbalanced, but worth salvaging or what?  Perfect for my rocking chair, which has new blue seat cushions. 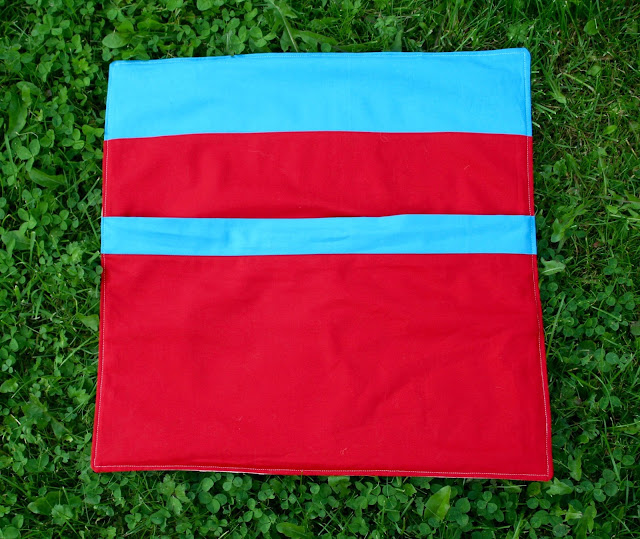 I used what I had for the backing, which has two colours to use up a 10 inch width of fabric strip of red and a smaller piece of blue. 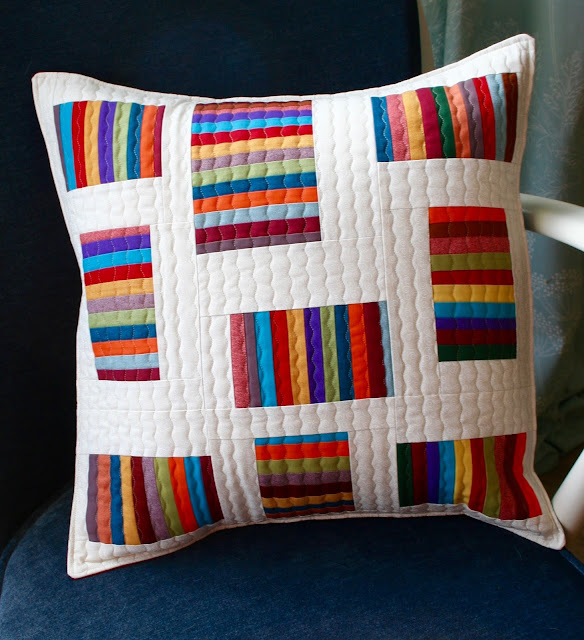 I did my favourite serpentine stitch quilting and I also stitched just under 1/4 inch all around the edge to stop the bright backing from showing.

Now I'm thinking it would look great if I used Barcodes to make a scrappy quilt.......... 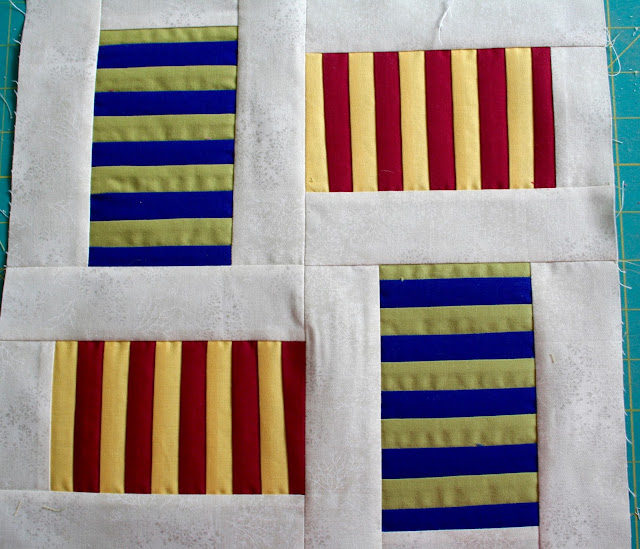 And what about the gruesome reject?  Well I haven't binned it, but so far I haven't had time to do anything with it.   Although I do make cushion covers for the cushions we use at work so I could always add a border and use it up.  Some of the plain ones I made from dreadful fabric I bought when I was a new quilter have received several compliments, so I guess someone will love the gruesome one, especially if they are colour blind!!!  I need to have a think about it, maybe go radical, after all if I make a complete dogs dinner out of it I haven't lost much have I?  One things for sure, when I do get it done, you will see the whole process, however it turns out. 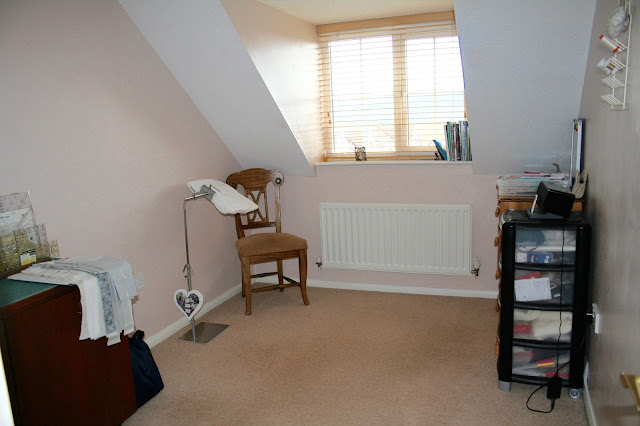 Remember this pic?  Sorry, no wonderful transformational pics to show you, in fact it got much worse, so much for doing out my sewing room. 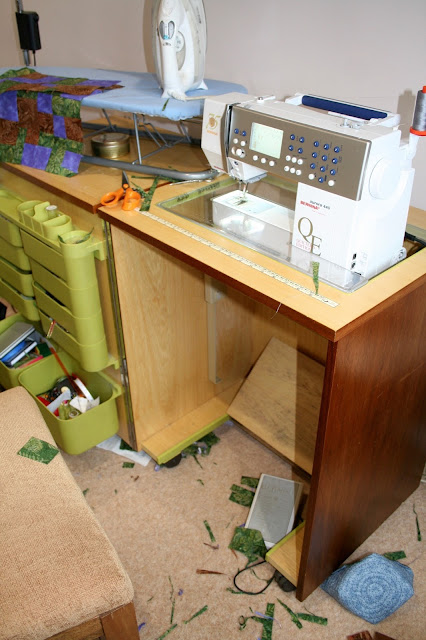 This was the last glimpse you got of it, just a reminder the blue splurge is the thread catcher!!! 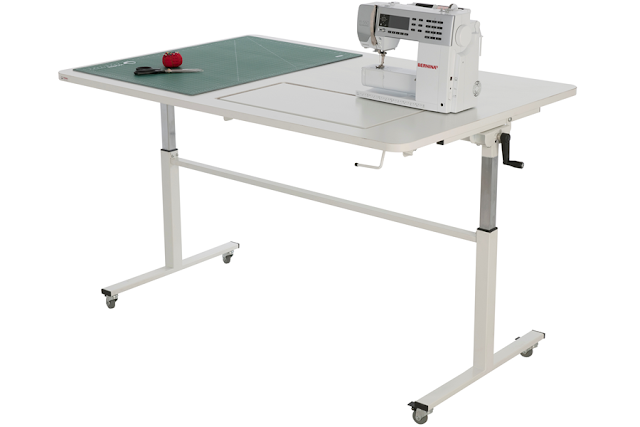 This is what I would like, see the aperture where the machine fits in so you can have it level with the table?  And look at all that space, it makes a great cutting table too, and it tilts so you can out it against the walk if you need the space for anything.  Perfect except for one thing, it is £899, or that's what it said yesterday, I have been told the prices are going up at the end of the month. 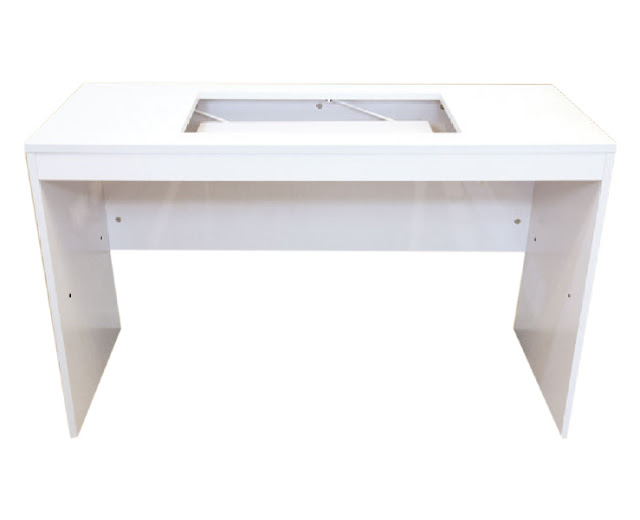 This is more affordable at £179, which will rise to £189 next month. It is smaller, and I won't be able to move it, but, with an Ikea table to the back, and maybe another at the side for quilting, it might make a very nice setup. It has lots of room for me to sit which the small cabinet didn't, I felt my legs were squashed and I couldn't get as close as I would like. It comes in white, beech and teak, I'm hovering between white and beech.

I will sell the small Horne Cabinet I already have which are about £400 new.  I have been advised they sell for between £100 and £150 secondhand, but mine is teak and a bit older so I will advertise it for £99 and settle for £80 which would make it a good buy.

But today the lounge and dining room will be finished and tomorrow the painter will start the transformation of the sewing room which is already cleared.  I already have great new lighting, LED lights inset into the ceiling, and now my north facing room is flooded with light.  It is the coldest room as it is above the garage, so I will look at a small electric fan heater.  I know they are more expensive to run but it will probably be for shorter periods as I do have a radiator in the room anyway.

So, from the confines of my bedroom I am sending you smiles,
From
Kate

Linking up with Lorna @ Let's Bee Social, Kelly @ Needle'n' Thread Thursday, Sarah @ Can I Get a Whoop Whoop? ,