It's been an eventful holiday season......

full of good and bad.  It's too easy to focus on the bad, I haven't been on the computer much and I have got behind in my emails and visiting, maybe I'd better explain using the sandwich technique.

First some good news, you are not going to believe this, guess what I got for Christmas?  A NEW SEWING MACHINE!!! 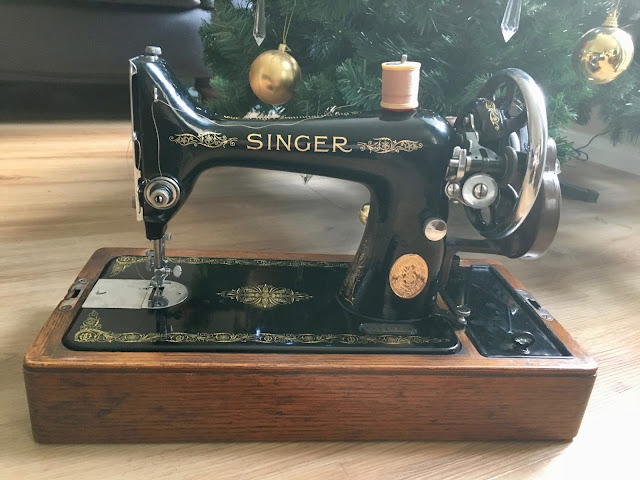 A gift from my daughter, isn't she thoughtful?  I'd better explain, she knew I wanted a vintage hand crank machine and found one locally, a 1929 99K (the K means it was made in Scotland, it's the same machine as the 99 I think), but but had no cover.  By the time she researched how to restore it and had worked it for several weeks she couldn't part with it, so she found another, this time with the original cover, it even has the key and the original instruction book.  It didn't have any extra feet though so she gave me the ones that came with hers, complete with labels which is which.

But, on Christmas Day my beautiful Indi had a relapse of her meningitis. 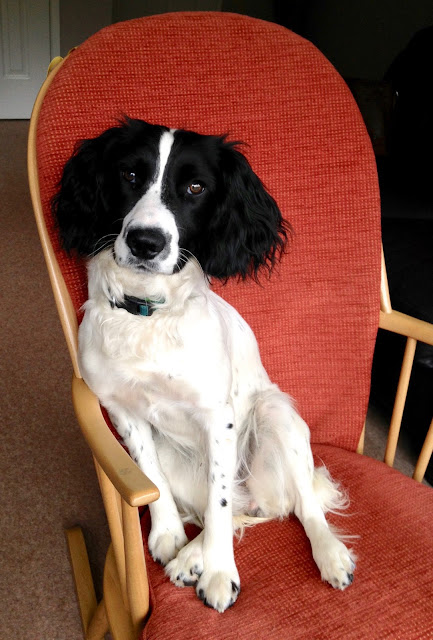 She immediately had her steroids increased to 30mg a day, a huge dose for such a little dog, although a lot less than when she was first diagnosed.  If you didn't know dogs can and do get meningitis which is almost always viral and the treatment is usually steroids (some dogs need a form of chemotherapy too).  Dogs who get meningitis are usually under a year old but a few are older, Indi was 2 years 9 months.  So far she has had two MRI scans and two spinal taps as well as another scan various blood tests and a stay in hospital, thank goodness for insurance.  If only my tale ended there, but no, she has now developed pancreatitis due to her long term steroids.  She will be ok, we caught it early,  although she is now on another three medications.

Ok, some more good stuff.  Guess what I was doing over the holidays?  You won't believe this but after talking about it for nine months I have finally.......... 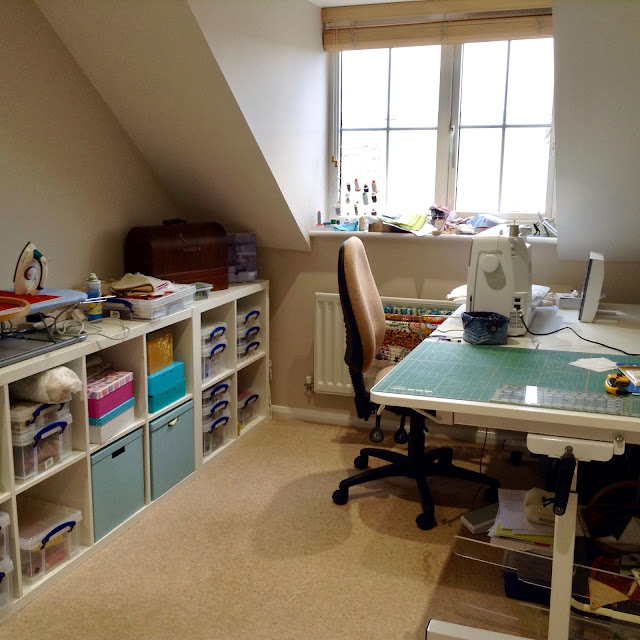 finished my sewing room!   It's not very big and alright, it's not quite finished, it needs some more storage boxes and I have ahem, a little more sorting and tidying to do, and my design wall is causing one or two problems, but I do have furniture.   Want a tour? 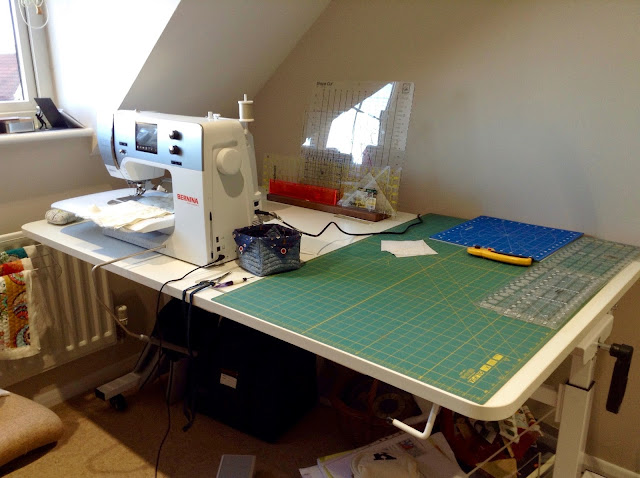 This of course is the wonderful horn table.  I had to order a new insert for Baby but unfortunately it was a smidgeon too big so I had to send it back, I am just waiting for it to be returned.  There is room for my big cutting board and it is also where my rulers go.  Just don't look under the table, that's still WIP land. 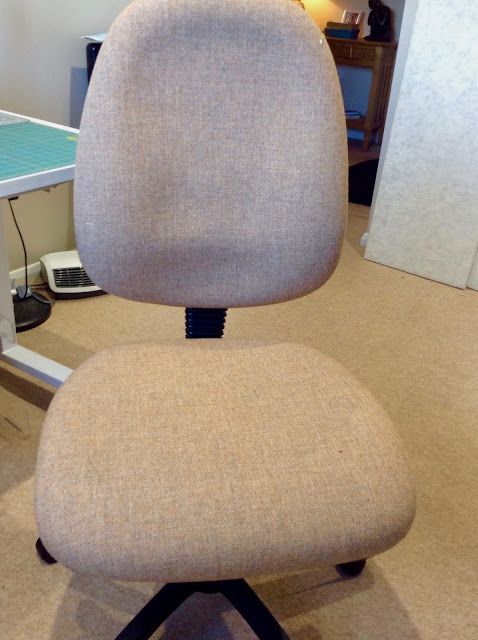 My lovely chair, beats the old dining chair I used to use, the seat tilts, the back tilts, and it goes up and down and round and round,  wheeeeeeeeeeeeeeeee! 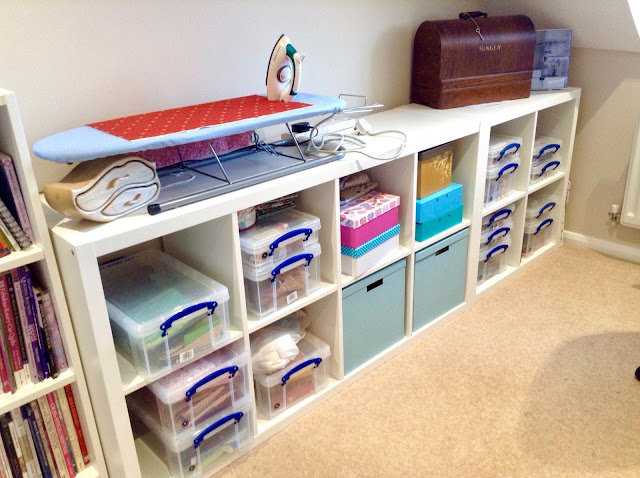 Ikea Kallax units, a four by two and a two by two, lots of cubes for my storage boxes.  I had some of these already and bought a few more, there are two Ikea large boxes in the middle for big cuts and backing pieces.  The medium size have individual colours in, well, most have two colours in until I get a few more.  One has solids, one has large scraps and the smaller ones have either WIP's or equipment in, it's work in progress just now.  On each shelf I can get two large boxes, or one large and two small, or four small.   On the top is my tabletop ironing board, if I need a bigger board I use the household one but the small one works most of the time.  You can see my new vintage Singer machine on top complete with cover. 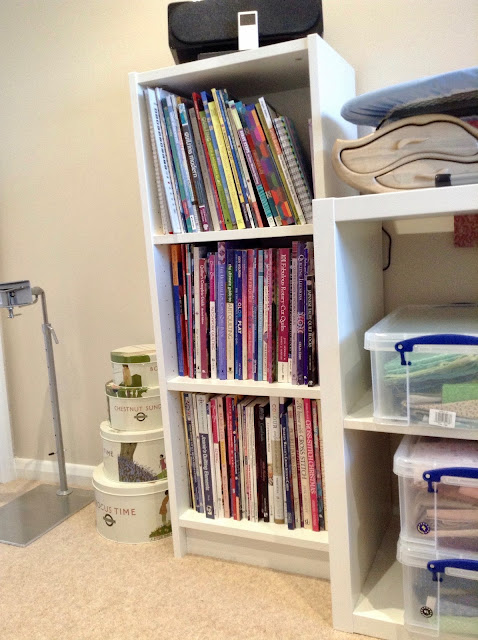 Billy bookcase, this is my craft book collection, mostly quilting with a few embroidery, my machine manuals and a DMC colour chart.  I keep my old iPod here with the dock, I quite like some low volume music when I stitch but anything else and I loose concentration.  Notice the cake tins that are not to be used as cake tins I received from my husband?  The top one is full of safety pins for layering quilts, the next one has all sorts of little things thrown  stored in there and the larges two are full of small scraps.  Next to it is my embroidery stand. 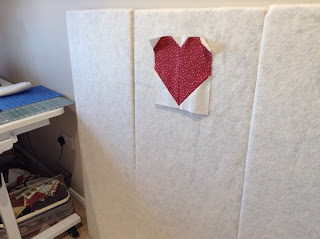 This is where the design wall will be, on the right hand wall when entering the room and next to the table, but I'm having a bit of trouble, I'll keep that for another day. 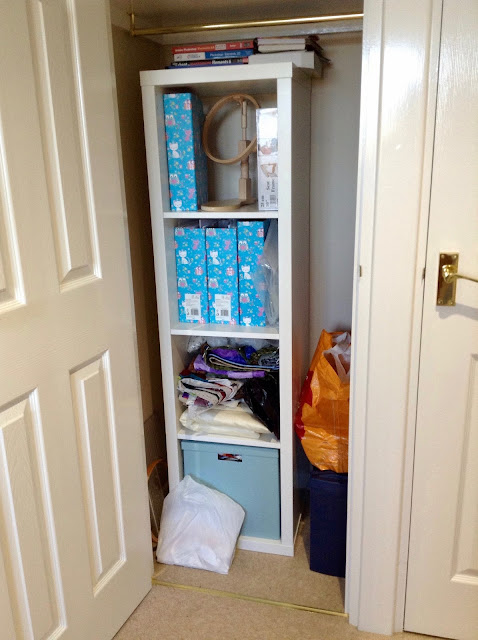 The cupboard is another WIP, it still needs some organisation, but I have a four by one unit here.  At the moment it has some WIP's and UFO's and assorted odds and ends, but Rome wasn't built in a day and wait until I get some quilts up, it will look stunning, the room, not the cupboard I mean.

Sewing?  Yes! I did get a little done, 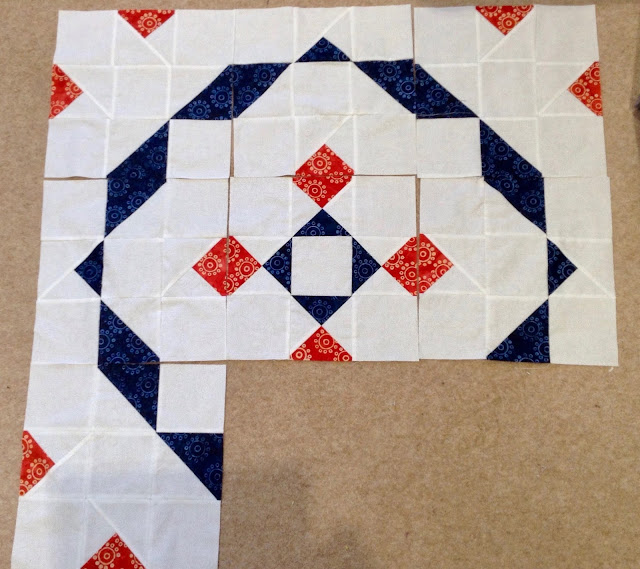 I finished the Meadowmist Mystery instructions for December.  Only I seem to have lost two of my blocks, haven't a clue where they are and yes, I'm sure I did four each of the second and third one.  This is why I need to be more organised, if I had put them straight into the box I wouldn't have lost them, I probably picked them up with some other stuff, I'm just trying to remember what else I was working on.

I did a little more stuff too but some is secret so you will have to wait until later in the month and some is barely started, although you may have noticed something on the design wall..........

So that was my Christmas and New Year holidays, the good the bad, and the indifferent.   We all have our coping mechanisms and one of mine is cleaning and reorganisation, this time my sewing room reaped the benefit.   One thing you can be sure about though, in this life everything is transient and next week or next month Indi will be much better, my sewing room will be more organised, and I will have done more sewing.

So until then,
Smiles from
Kate x