something nice.  I'll tell you all about it later but first I want to show you 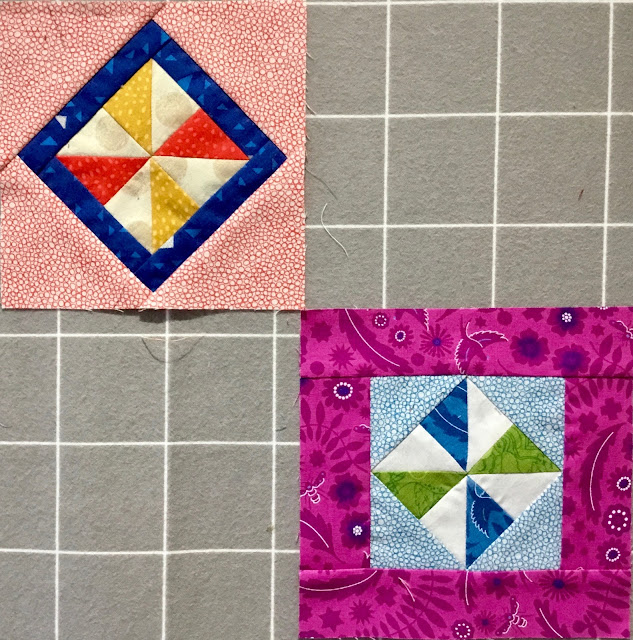 this weeks Gypsy Wife blocks.  Square in a Square Pinwheels, there are two of them using the tiny 2 1/2 inch pinwheels.  I like these blocks.

I have had little time to sew this week, sad :-(  But I did get into my sewing room for a bit yesterday to start 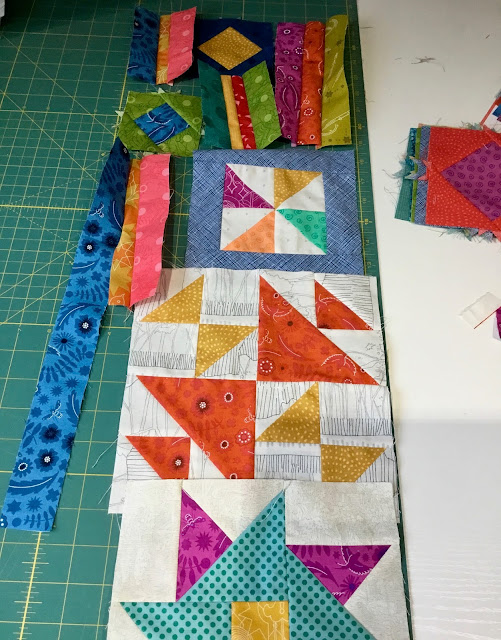 putting together section nine of Gypsy.  No I haven't done the previous eight, I'm starting with nine on the extreme left.  I was going to do one to five first but I need the longest strips and some double length strips at the sides and it just seemed easier to do the left side first.  As you can see I didn't get that much done but I cut the strips I need and sorted the blocks out.  I'm not sure about the small square in a square top left though, it's in one of the strips too so I may just make another one.  I'll decide when I start stitching it together, as you can see I haven't even pressed the strips yet. 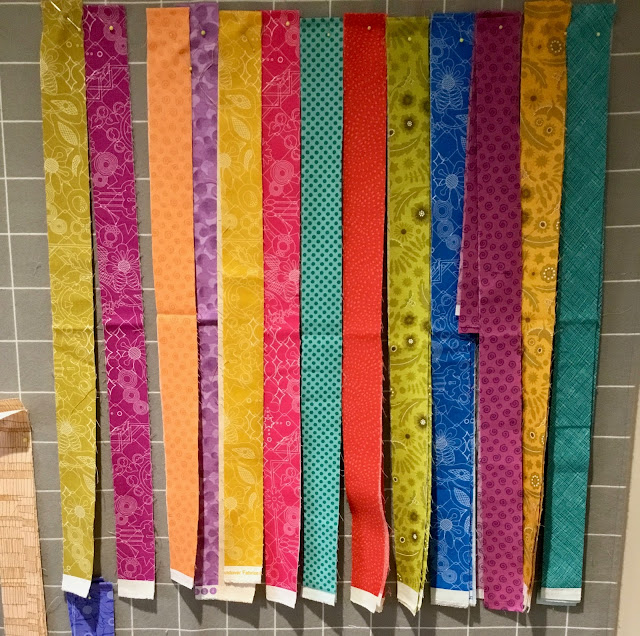 These strips are pinned up on my design wall, they are for the right side of Gypsy.  Colourful enough for you? 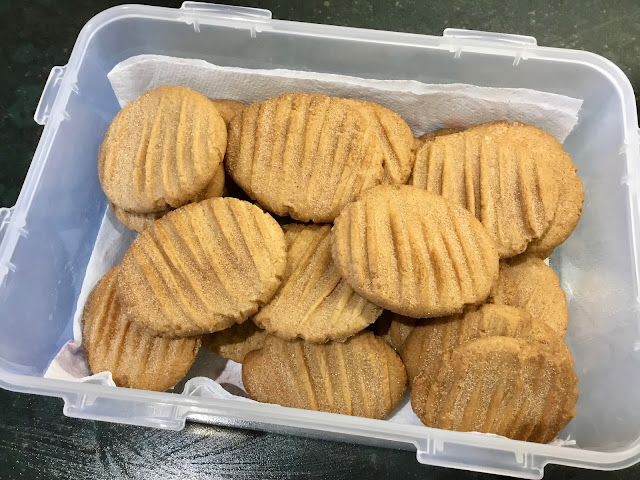 Fork biscuits.  This has to be one of the easiest recipes with the fewest ingredients ever.

Ingredients
8 ounces (250g) butter or margarine, whichever you prefer, at room temperature
4 ounces (125g) caster sugar, thats the fine one for baking, not the one you would use for icing or put in your coffee.
10 ounces (300g) self-raising flour.

Mix the sugar in with the butter with a wooden spoon, no need to cream it like making a cake, just enough to incorporate it will do.
Gradually mix in the flour and any flavourings.  You might need to use your hands to bring the dough together, it should be on the soft side but not sticky. 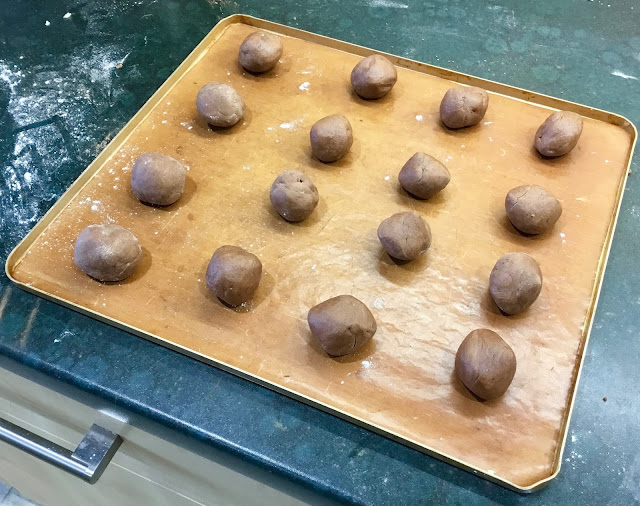 Take a walnut size piece of dough and roll it into a ball and place on a greased baking tin.  I use those nonstick liners so I don't need to bother.  You will get about 32 biscuits from the full recipe so you will need two trays but you can always just use half of it and make one tray of sixteen.  That's what I used to do but I soon learned it was easier to make the big batch, then I would have some left for the next day. 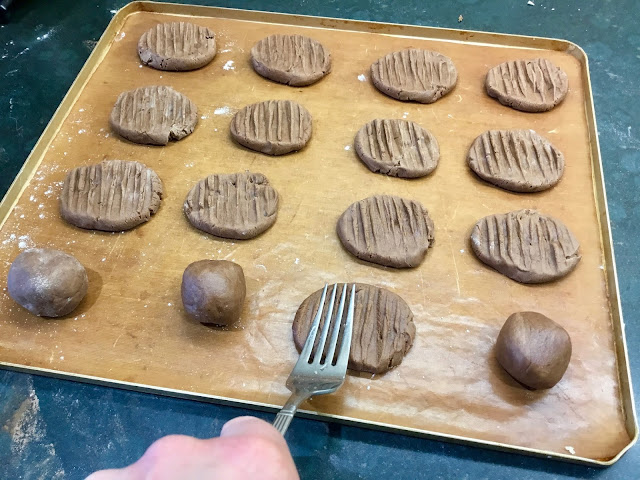 Dip a fork in cold water and squash them flat leaving fork marks.  It's a great recipe to make with kids. 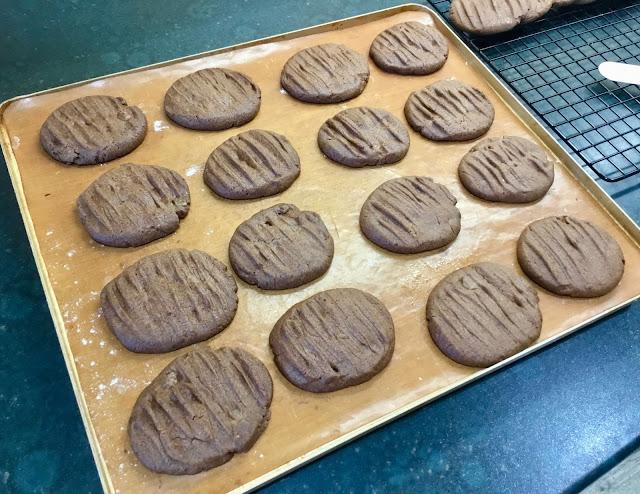 Bake in the oven at 180degrees Celsius (Gas 4) for 15 - 20 minutes depending on how hot your oven is, until a pale golden colour, but it can be a bit hard to judge when they are chocolate.

I leave them on the tin for a few minutes when I take them out then put them on a cooling tray until cold. 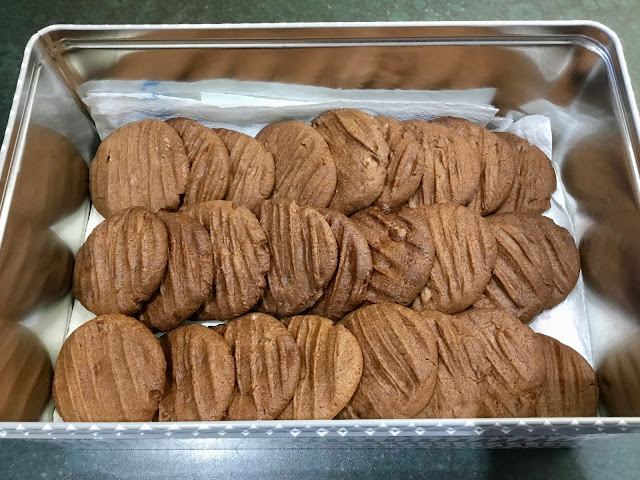 Keep in an airtight tin.  I would tell you how long you can keep them for but they never last more than a day or two.

Add whatever flavourings you like they are so versatile.   I use:

Cinnamon, two teaspoons and I mix a little extra with caster sugar and sprinkle on the top when I take them out of the oven.  About 1-2 teaspoons sugar and a good quarter of cinnamon should do it.  I leave them on the tray for a few minutes and shake off the excess when i put them on the cooling tray.

Chocolate, replace an ounce of the flour with cocoa powder, or even better make it double chocolate and add about four ounces of chocolate chips.

Lemon or orange, add the finely grated zest of a large orange or two small lemons, or just some of each.  Orange with sultanas would be nice too.

How about adding some ginger instead of cinnamon?

What would you add to your biscuit mix? 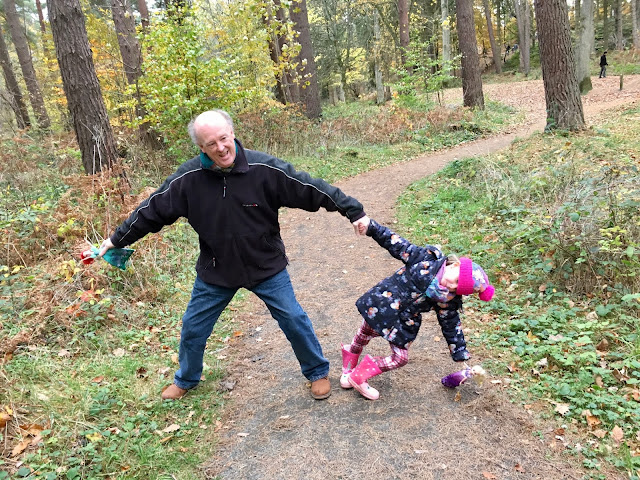 this!  We took our youngest granddaughter out for a walk in the woods at the weekend.  Hubby is trying to get Emily interested in nature and is teaching her the names of trees, flowers and birds.  He asked her if she knew the name of one particular tree,  "Kevin" was the reply.  She has obviously inherited her Grandfathers sense of humour.

And that's all for today, not my usual post but I already told you I haven't been able to sew.  I do hope you will try the biscuits though, they are so easy for children to make and no rolling out or cutting either.  If you try them let me know what you think, and I would love you to let me know what flavourings you think up too.

Linking up with:
Wednesday Wait Loss
Midweek Makers
Can I Get a Whoop Whoop?
Finished or Not Friday
What a Hoot hosting for TGIFF
Crazy Mom Quilts