Stitching and catching up.

I'm finally starting to catch up, much to my relief, I'm still behind with some things but that's just the way it is and it will all get done sooner or later.  Before I tell you all about my wonderful weekend away want to see my design wall? 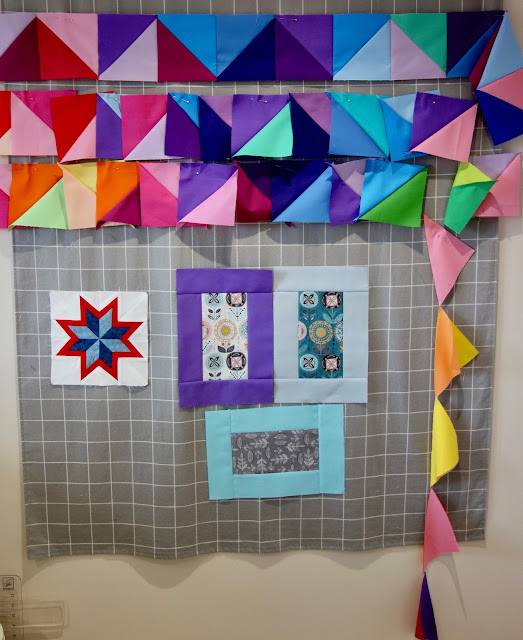 Not much has changed with Postcards, at least not on this pic, I have stitched the second row though and half of the third so a little progress. 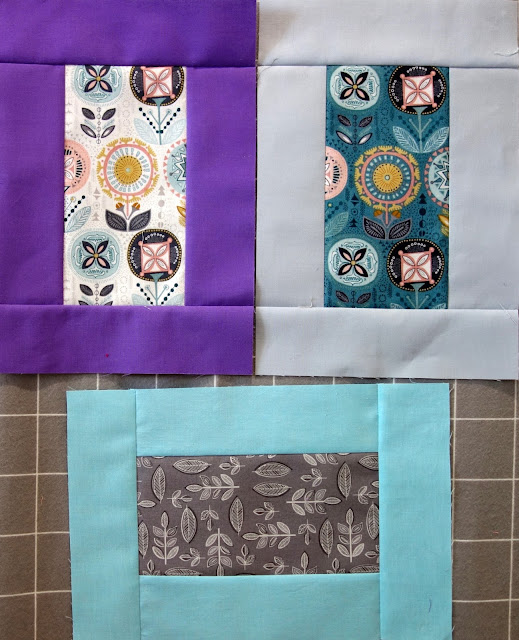 These are my bee blocks for Paige who blogs at Quilted Blooms, Paige is making what she describes as a Teenage I Spy quilt.  I am a little late with these blocks they were due last month, we have two queens on two of the months in the year so we get finished well before Christmas.   I have very little in patterned fabrics, that is I love tone on tone and solids but when I buy patterned I never seem to know what to do with it, but I found these fabrics lurking in a box which seemed to fit the bill.  You can find the sizes and tutorial on our blog Bee Inspired. 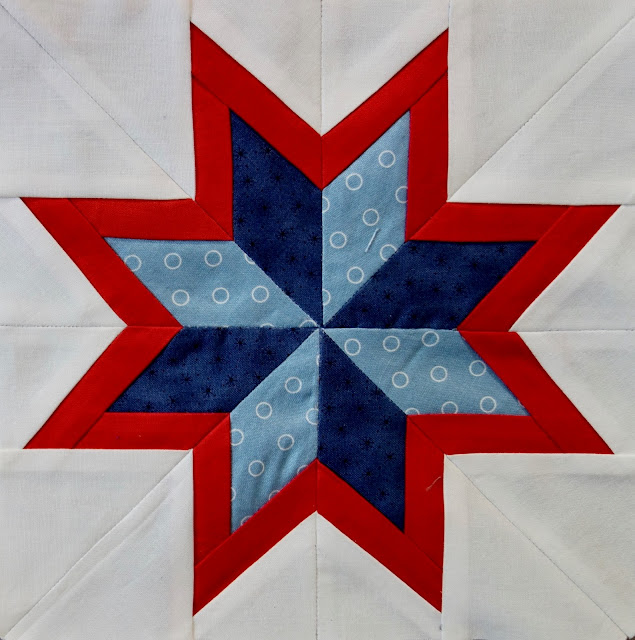 This is my second bee block, Starry Night for Emily at The Darling Dogwood who is queen for April which is me bang up to date.  I met my nemesis, the most dreaded paper piecing, I did say I wanted to get to grips with it this year and this was my introduction.  Emily wanted it either blue with red or red with blue on a white background.  It took me ages, my own fault most of it, I just kept making mistakes, I would add the next piece and then stitch on the wrong line not realising until I had trimmed it therefor wasting the fabric, honestly, it drove me round the bend.  Finally I got the pieces stitched and then I had to stitch them together, that was another story, could I get the joins lined up properly?  Some seemed to go in no bother, I did remove the seam allowance paper and that did help though.  The final seam was the worst, I had it in and out several times it just wouldn't line up, finally I took another seam partly out and redid it and that did the trick, finished at last.  You can find the Bee Inspired post here which has the link to the free pattern too,

Guess what this is 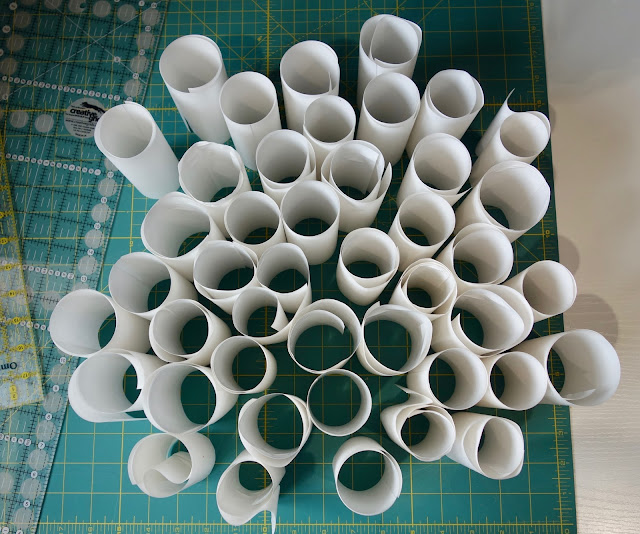 Any idea?  No?   Its freezer paper and there are 48 of them,  they are the backing pieces for the signature panel for the second wedding quilt, I showed you the block last time. 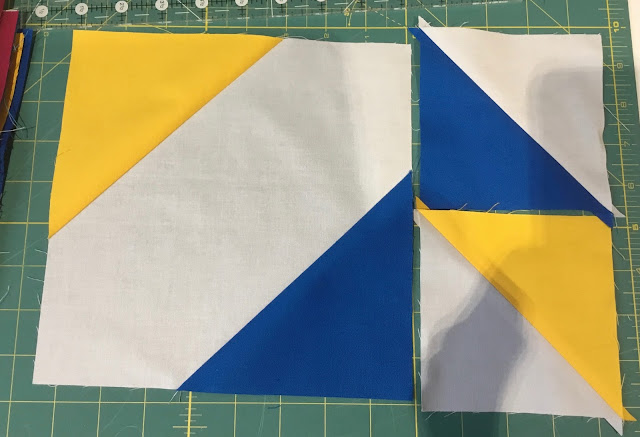 This is it along with the two bonus triangles.  The middle bit is 4 1/2 inches wide, I will have to cut the ends of the paper though.  All the blocks are made and all I need to do is iron the freezer paper to the back and add some tape to the front so guests don't sign in the seam allowance, I did this for the first signature blocks and it worked like a charm, no one wrote in the seam allowance.  I still haven't decided what to do with the bonus triangles yet though.

Want to see my embroidery? 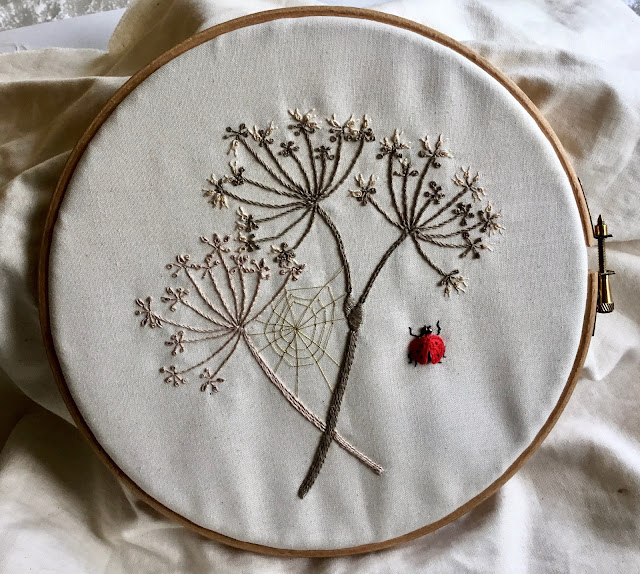 I finished my small piece.  It was supposed to have a spider suspended from a thread but I don't like spiders, I mean I really don't like spiders, I couldn't have one on my work so I made a ladybird instead.  The wings are made separately using wire and stitched in place at the end, stump work, the rest is surface embroidery. 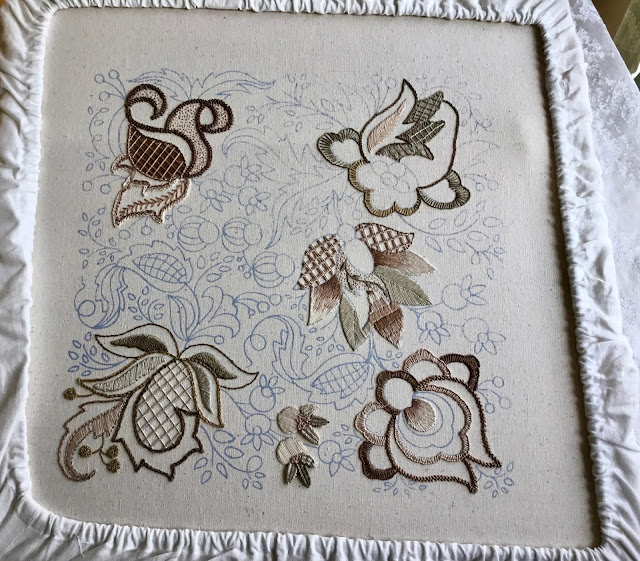 This is the big piece I am working on which I progressed somewhat. 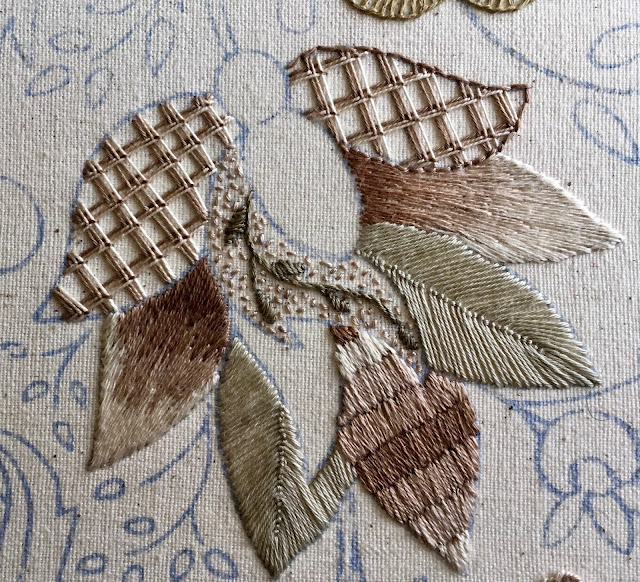 This is the bit I progressed, I did the green closed fly stitch leaves and the stem stitch vein with the seed stitch in the middle.

We only had an evening, a full day, and a morning to stitch but we had a little time off in the afternoon so my friend and I went into the small (as in tiny) town as always and of course I had to visit one of my favourite shoe shops where I found, 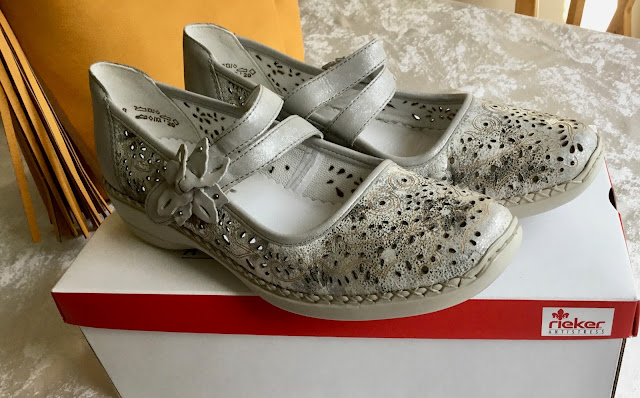 these beauties, are they not lovely?  I do so love them.

That's all my work since I last posted.  I've been thinking of what to so next as I have three quilts on the go not including any UFOs.  I also have some secret sewing to do, although you won't see that for a while yet, and I'm still in the planning stage.  I decided to get on with Postcards, at least I intend to finish the first four rows and get them stitched together, then I want to do the front of the first wedding quilt which I think will be fairly quick to put together.  I will need my design wall which is why I will finish the first quarter of Postcards first.  I do wish my design wall was a little bigger but at least I have one now so I won't complain.

I'm not sure how much sewing I will get done in the next week, I have all the last minute stuff to do before 'the wedding'.  However, I will endeavour to be back next week to bore you rigid with my ramblings.

Linking up with:
Midweek Makers
Can I have a Whoop Whoop?
Finished or Not Friday
Crazy Mom Quilts