So, what have I been up to this week?  Well my sewing mojo is coming back, as I won't be taking my machine to class in future I decided to get some more of the six inch blocks made for my modern sampler quilt.  I have gone from 21 blocks to 30 so I'm happy with that. 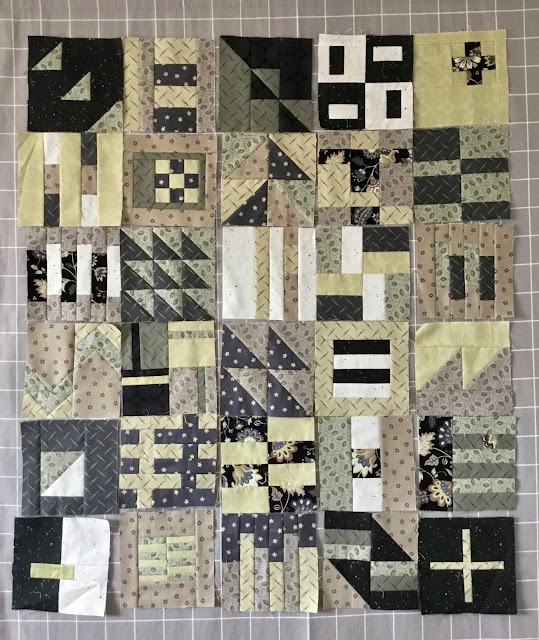 What do you think?  This won't be the layout of course but I can see the colour mix when I put them all together.  I cut three strips of each fabric when I started, 11/2, 21/2, 31/2 inches, but after making some of the blocks added another two fabrics in, so I have been using those two more to catch up.  I have used most of them about the same amount but I do have an excess of the tone on tone black that looks the most solid, the off white, and the dark grey and green with the little dotted lines on.  But, as three of them are dark it's harder to use them up together so I will probably cut another 31/2 inch strip of each but give preference to the fabrics I need to use most, if that makes sense.  Do sing out if you think my colour or fabric mix is wrong though, I may have missed something. 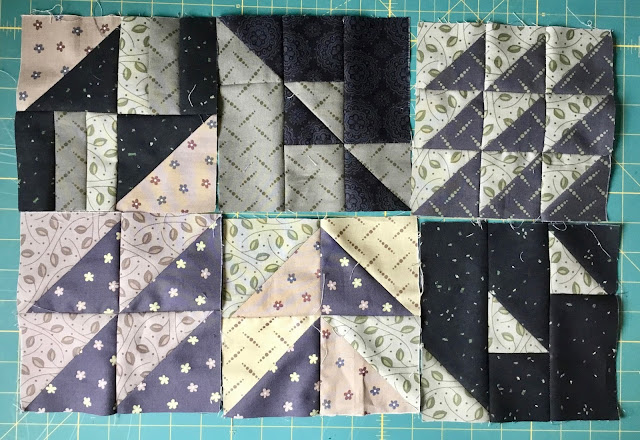 These are the latest I made, triangles, I can't show you a pic of the other three because I had already mixed them in and I can't remember which ones they are.

Oh I didn't show you the fabrics for the Gypsy Wife quilt I'm starting did I? 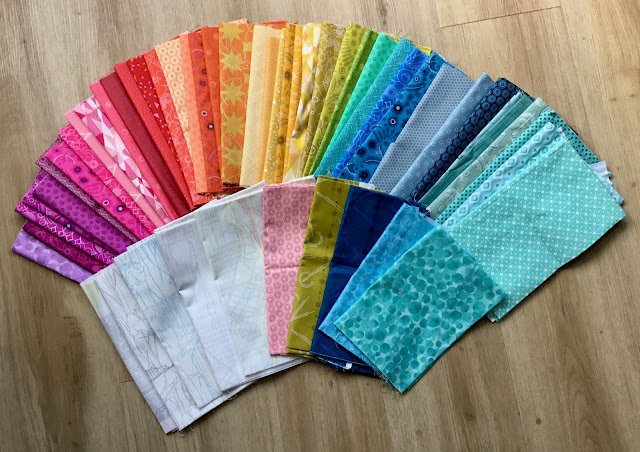 What do you think?  There are a fair few from the Alison Glass Sunprints which I love, some of the fabrics are from my stash and some I bought specially.  The Carolyn Freidlander low volume ones at the front I will use as backgrounds.  All the ones at the back I have in long quarters so I can cut a couple of strips off before I start cutting into them.  Now what I need to know is are there any I should remove.  A couple of the blues are rather dark and a couple are a bit insipid, and do you think the orange one with the yellow stars is ok to use as all the others (apart from the low volume ones) are tone on tone but that one has two definite different colours.  I would love to hear what you think.  The first block is today 3rd August, if you haven't heard about it and want to join in check out Gnome Angel for the first block post which contains all the other links.

Now to tell you one of my two pieces of news, I may have to have a short break in October, although I'm hoping to get a couple of posts pre scheduled, why?  I have to have one of my cataracts removed.  I don't know how long it will take for my eyes to settle afterwards, I know I won't be allowed to drive for several weeks until after an eye test, and I will need new glasses.  One cataract has been growing a lot faster than the other and my sight is very lop sided, the worst thing is I have problems seeing colour accurately, in fact it was the first thing I noticed, I see colour differently in each eye but because my eyes have been affected differently the eye with the worst cataract has the best sight, it's weird.  I don't know when I will have the second one removed, it depends on how it grows and also how my sight is as it will be different again after.

I forgot to show you what I bought, 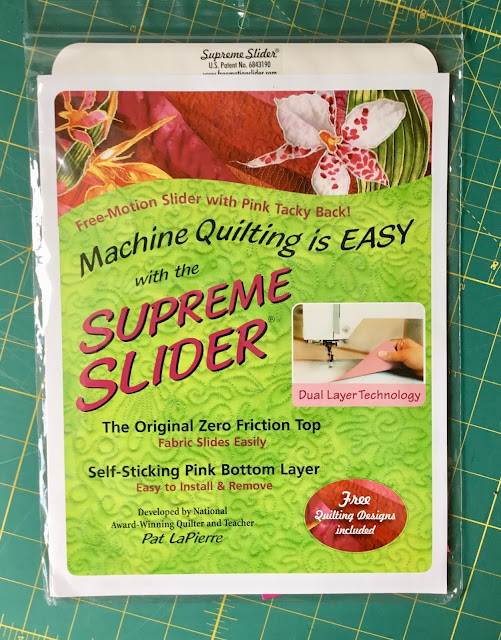 I know some of you won't have forgotten what happened when I borrowed Wendy's (blush blush), I wasn't sure about using one at all but two things changed my mind, the first is I have been talking to a couple of people who use them and they tell me how wonderful they are, the second is, I found out the pink side goes down, not up, whoops!!!  Maybe it will work better this time.

I also had a sudden revelation about my quilting, you know how my table is set up now, I showed you last week? 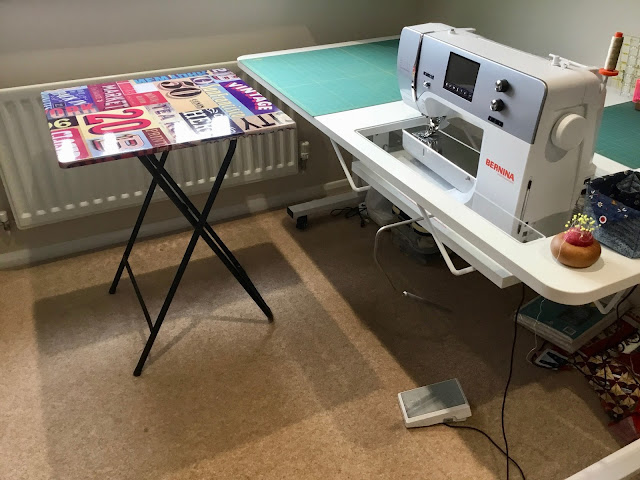 I suddenly realised that for the last few months since I got the table I have been quilting with the cutting mat in position, and of course it's a non slip surface (more blushes), so when I try the slider out the mat will be back under my bed, out of the way and nice and flat.

Oh, my other piece of news, I had been thinking of early retirement, I was supposed to last Christmas then I couldn't as someone left work and I was the only one who knew all the systems and I said I would stay another year, then I said I would leave this Christmas, well I'm leaving in OCTOBER!!!  I won't be going back after my cataracts, all that lovely time for sewing and getting fitter.

You see my fitness has been going downhill the last year, it started when I had the fall in Corfu, I fell on my head and I didn't even have time to put my hands out to save myself.   I ended up with a nasty concussion, it affected my memory and knocked my confidence.   I didn't feel well enough to go out on my own for a few weeks as I had dizzy spells.  Anyway, I'm fine now and have been for ages, but I stopped walking my dogs, Gary was doing it all, and I have just slipped further and further back ever since, sad.  But now that I'm leaving work I realised I can go two ways, either stay as I am and become a total couch potato, becoming more and more unfit as the years go on with less and less mental stimulation as I loose touch with people and eventually stop going out.  Then I will become a recluse and fall into early senility from watching soaps and reality TV, (well, I may have exaggerated a little, giggles).  Or, I can get off my butt and get moving, do more quilting and pattern designing (yes I know I'm not a designer and no I don't ever want to be but if I so happen on something good I will share it, honest).  So, seeing it was the first of the month and as it was an investment in my health and my future I treated myself to 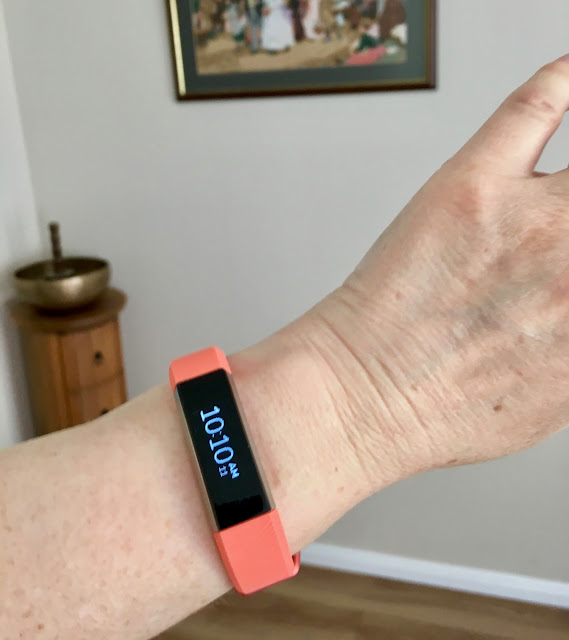 a Fitbit.   In case you haven't heard of them, and I hadn't until a few months ago, they are a combination of a watch, step counter, sleep monitor, and fitness tracker all in one, mine records my heart rate too.  They sync with your smart phone and you get a permanent record of your progress.  At least that's my understanding in a nutshell.   Now I didn't just jump into it, I did a fair bit of thinking and spoke to three people who had them, the general opinion seems to be they can be excellent for improving fitness, as long as you use them that is.  One said her daughter and husband used theirs constantly and challenged each other (can't see Gary getting into THAT), one likes it but doesn't use it to it's full capacity, and one just checks her daily steps and bought it as a watch really, although sometimes she finds she has almost reached a target and marches about the house to the tune of 'The Grand Old Duke of York' until she hits it (is it only my daughter who would do that or do you see a family trait somewhere?  Don't answer that).  I've only had it for three days so I will give you my early impressions next week if anyone is interested.

The long arm of the curse that is family illness has caught us again, it turns out to be similar to the episode we had in January.   When illness comes like this it is frightening, potentially devastating and turns your nice ordered world into turmoil as all the potential scenarios play constantly through your head, and the worst thing is there is nothing at all you can do about it.  At the risk of sounding unfeeling and uncaring I will tell you how I am learning to cope with it, but if it isn't your thing come back next week to see my first Gypsy Wife block.

Life is full of problems of all different sizes, some are small but to some seem huge, it depends on your perspective and past life experience.  Others are so enormous is their magnitude it is hard to imagine how you will cope, but you will simply because there is no other choice.  These moments in time are all transient, they will pass and eventually another event will come along which will rock your world, for good or for bad.  I try to recognise the bad times as just that, moments, and just get through them knowing they will pass, I try not to focus on possible outcomes, only the fact that life is all transient.  Do you remember the fantastic things that have happened, the most wonderful times, like holding you child for the very first time, your wedding day, or looking up and seeing the most beautiful rainbow that stops you in your tracks with the beauty of nature?  These are also moments, we don't constantly think of them, and when we do we are living a memory, not the present, and it doesn't seem as vivid in it's intensity as it did.  The bad times in life are the same.  I try not to let my wonderful moment memories be spoiled by this moment or situation, that I know will pass in a few hours or a few days, or sometime.  I'm not saying that it works for me all the time, I still have my moments of absolute panic and fear, but in my more rational times it's what I try and hang on to.   That's my thoughts for what they are worth, you may agree you may not, we are all different, that's what makes life so interesting, it would be very boring if we were all the same.

Oh dear, I've probably bored you all silly with my philosophising, and you thought this was a quilting blog.
Before I forget the winners of the 12 Days of Christmas blog hop are announced tomorrow Friday 4th August at Confessions of a Fabric Addict.  You can find my contribution post with the free templates to make your own on this post if you missed it.

Normal service will be resumed next week, with maybe a little about the Fitbit thrown in.

Until then.
Smiles from,
Kate x

Linking up with:
Midweek Makers
Wednesday Wait Loss
Needle and Thread Thursday
Can I Get a Whoop Whoop?