but not a lot.  It's been one of those weeks when I feel like I've spent so much time in my sewing room, but I haven't much to show for it.  Do you ever get weeks like that?  Of course it doesn't help that I'm still in my 'let's see how many mistakes I can make in this block' phase but It's a phase, I'm sure I'll grow out of it sooner or later.  So what did I do make?

First of all I corrected the mistake I made in the Stash Bee block, 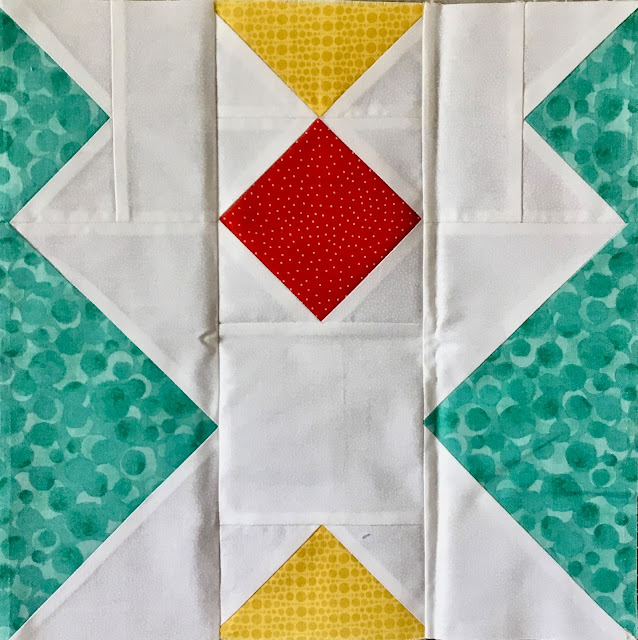 much better, although I know a few of you liked the first one.  Sorry, I had forgot to take a pic and had to take it out of the envelope so it has fold lines, I cropped the pic so you are missing the corners, they are there, promise.   I still haven't posted it on the Stash Bee blog yet either, but both will be done by tomorrow.

Then it was time for Gypsy, oh I am so enjoying the sew along, in fact I am even having a forage into the dark side (Instagram).   I'm not sure what I'm doing over there, I can add pics now and I can click to like pics, hey, I even learned to do a hashtag, but I don't know how to find posts I've seen before and want to go back to and commenting is a learning curve I haven't quite figured out yet.  Commenting is a different world compared to blogland, no-one says much, as you can imagine that is so difficult for me.

I digress, here is my latest Gypsy block, From the Heart. 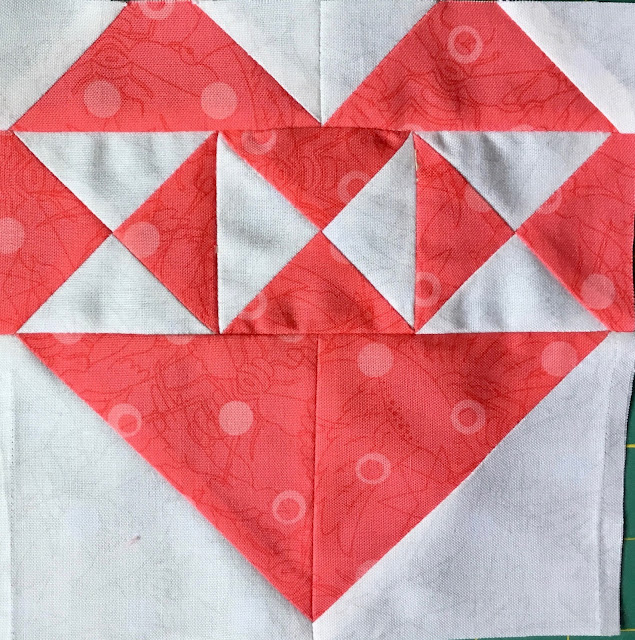 Now this is the one I'm not sure of, not because I don't like it, it's the shade, it's a little different to the rest of my fabrics, however I'm going with it and I'm planning to add a bit more in a couple of the filler blocks.  This was also the block that cause me the most trouble, my own fault initially, I used a directional fabric for the background.  I knew I would end up making extra blocks so it went the way I wanted it to, that was fine, but I just couldn't get them ALL to go the way I wanted, and in the end I scrapped it and started again, so it was nearly a blue heart.  THEN those little hourglass blocks gave me no end of trouble, I think it was down to the size, they are so small, it's only a six inch block and the seams were so bulky.  But, tis done now and I'm happy with it, but I don't want to make it again, not just now anyway.

Do you want to see next weeks?  Ok then 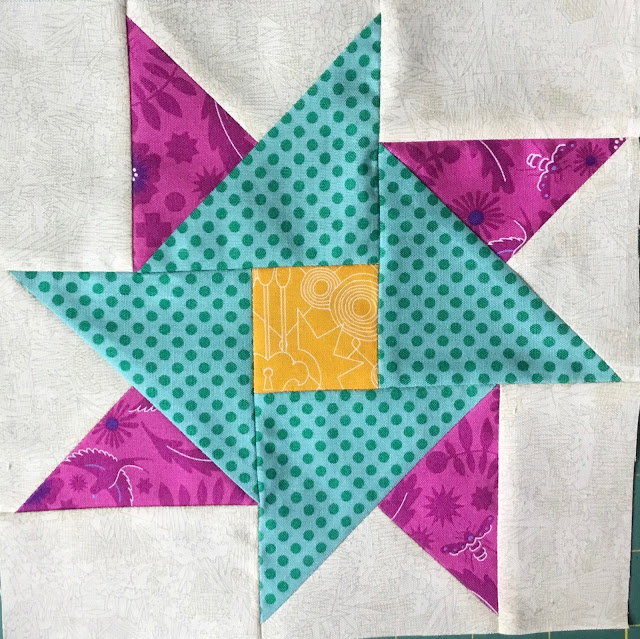 This is Hope of Hartford, a 7 inch block which as you can see has partial seams.  Now I haven't really done much with partial seams before but they are quite straightforward and nothing to be scared of, although I did learn two things, firstly make sure you add the correct side of the block as you go around, I added the outside of the second block, you can see where i unpicked it on the edge, and second, when it's such a small central square only leave an inch undone when first adding it, I left myself very little room to manoeuvre.

So, what do you think of these new additions?  Someone on the Facebook page commented I was very brave with my colour combinations, brave or foolhardy?  I'm fed up playing it safe, this is my wild quilt and they say fortune favours the brave, so I'm going for it.

I was so sad last week, Festival of Quilts was on and I wasn't there.  I had thought of going and planned to go, but then I thought we were going away, but we couldn't get booked up and we didn't and I ended up at home crying into my fabric, sad...........  So I consoled myself by going SHOPPING!!!  Well I treated myself to some more fabric for Gypsy by way of consolation, which was a lot cheaper than train fares and entry fees to the NEC, even considering I would have stayed with my daughter who lives about 20 miles away.

AND, guess what the postman brought me about half an hour ago? 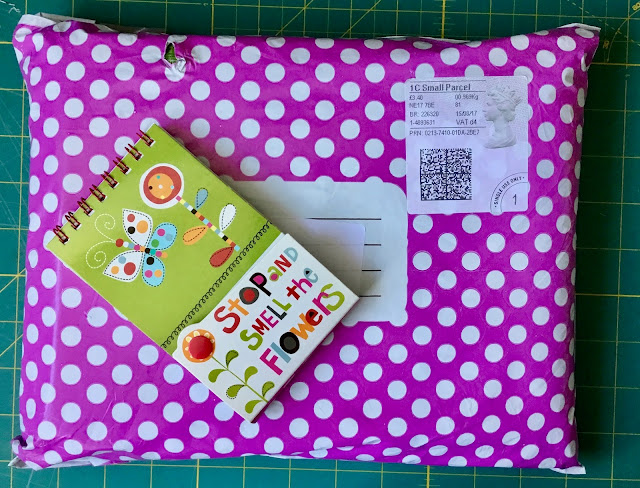 My shopping.  You can tell from the packaging it has nice contents.  The Postie didn't bring the note book of course, that was a little surprise from Janice a few months ago when she sent my mini, Chicken Poop, that's the name she gave my mini and if you are fairly new here I'm not kidding, have you ever been given anything called Chicken Poop?  If you want to see it and read about our swap you can find Janice post here at Color, Creating & Quilting and my mini for Janice HERE.  Then let me know what you think.

Oh, you want to know what was in the parcel? 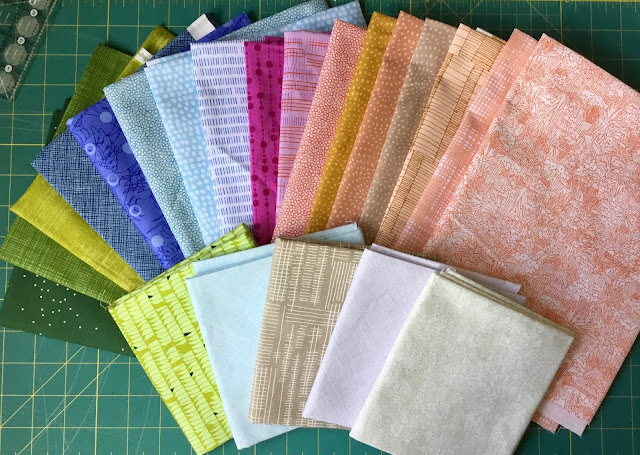 This little lot.  After studying my colours for Gypsy I decided I needed more green and red, some lighter shades, and some darker ones to give me more contrast.  Yes I know there is no red but I couldn't get any pillar box red and I didn't want pinky red or orangey red.  So, I just went through the different colours and chose what I liked, I have more green, I have dark and pale shades, and I think they will bring more contrast, and I love a bit of contrast.  Nice little haul is it not?

This week I have a bit of a quandary, it's my sewing group on Saturday (no we still haven't managed to book a few days away, have you seen the price of some of the cottages?) the question is what do I take?  I decided last time I wasn't going to take my machine again, I'm struggling to lift it in and out of the car, what I would really like is a vintage Singer Featherweight, the earlier ones only weigh 1.2 lbs apparently, although that won't include the box I don't think, and Margaret from margiestitcher takes hers to class on the bus!!!  Brave woman.  But have you seen the price of them now?  I would have to have one that was in good working order, I know my limitations, but I'm just not prepared to pay several hundreds of pounds for one.

So, what do I take with me to my group?  I didn't want to start another project but there is no other option, but what should I start?  My thoughts are running to either orange peel or circles (no I haven't finished it yet, it still needs the FMQ and binding) using appliqué.  It will be scrappy, I have plenty of low volume fabric and I was thinking of maybe a rainbow, or perhaps on a dark blue, I have some of that too, any thoughts?  I was set on orange peel initially but more and more I'm leaning to circles, they just go round and round in my head............

So that's been my week, well, I have another Gypsy block or two but I'm saving them so you will just have to wait hehe!

Edit
I just HAVE to tell you, I've been featured again, that's twice in two weeks, this time it's at Wednesday Wait Loss if you would like to read about it.  I feel so honoured, thank you Jennifer.

Linking up with:
Midweek Makers
Let's Bee Social
Wednesday Wait Loss
Can I Get a Whoop Whoop?A Quarter Inch from the Edge hosting for TGIFFFinished or Not Friday