Well all my good intentions of getting back to posting on Wednesdays I am back to Friday.  So, what happened to make me late?  I don't have an answer to that one, except I haven't much to share and the insanity that is Gypsy is still very much in evidence.  I love Gypsy and it's still my dream quilt, but I would like to get my life back.  Sometimes I have been tempted to shelve it and do some other stuff, like the Christmas projects which will not get done this year, but if I stop I don't know if I will ever get started again.

I have such a messy workspace, it's not my fault, honest, well, not all my fault anyway, I'm blaming Gypsy, there are just so many fabrics I can't put away.  Like the too many commas in this paragraph hehe!  Want to see what I mean?  Not the commas you can see that anyway, the workspace. 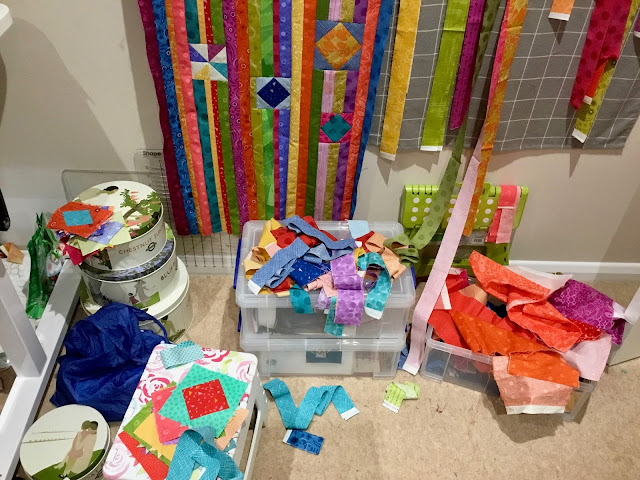 That's what I mean, and that's the bit I can show you.  I think it would be so much easier if I was using different strips to those I am using in the quilt, I'm trying not to put a strip next to a block of the same fabric or colour and it is so hard.  I have spent hours and hours just choosing the strips and then I get so far and need to change them it's driving me gaga.   Yes you do get a glimpse of Gypsy, sections 8, 9, and ten are finished and stitched together, about a third of the quilt I would say.  I have also finished section two and section one just has the left side to finish, it should have been done yesterday but for the strip carry on.  On one or two of the blocks I even ended up changing the border as it was easier than finding another strip.   Want to see where I actually do the business? 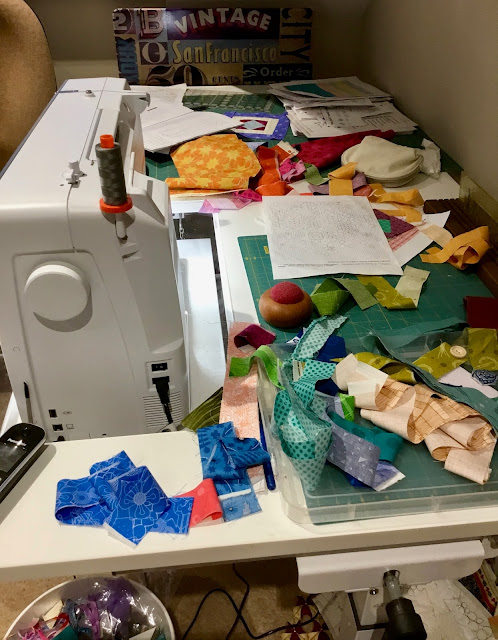 My sewing table, yes it's just as bad, strips, fabric, worksheets, and the far end is my cutting area too. My bin on the floor is starting to overflow and I can't even show you my lovely new trolly as the bottom shelf is full of scraps to be sorted, I don't know where I will put them, my scrap boxes are crammed full already. 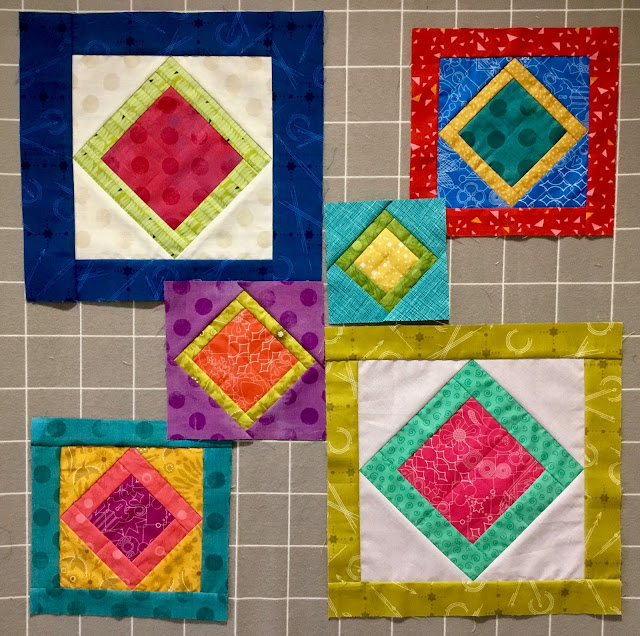 These are this weeks blocks, week 18 Square in a square with Courthouse steps.  There is only one block next week, the very last one, then you get to see the quilt in construction properly and by Christmas the top will be finished and will be revealed in all it's glory.  If I ever get the strips sorted that is.

I was in the lovely town of Harrogate for the Knitting and Stitching show on Saturday with my friend the lovely Jan, we had a great time.  I do think the show is going back though, although there was some lovely quilting stands there were fewer than usual and there appeared to be more of the cheaper retailers in evidence.  It is a craft show though so it's not all quilting, in the ten or more years I have been going there have been many changes.  At one time it was full of cross stitch retailers but there was only a couple this year, and then every other stand seemed to sell stuff for card making and that has now all but disappeared.  Even knitting seems to have shrunk a lot, and in my opinion stands selling handbags which are manufactured don't come into the category of knitting and stitching.  The Bernina stand seemed to be doing a good trade though, no I wasn't shopping for another machine all I wanted was some more bobbins for Baby, there isn't a retailer nearby and online I noticed they seem to sell for more than the RRP so I decided to wait because by the time I added postage it was ridiculous.

The first thing we did on arrival was to go to Betty's Tearooms for brunch.  I don't know about you but I always think the food available at shows is overpriced and poor so we always eat before we go in and it was almost lunchtime when we got there. 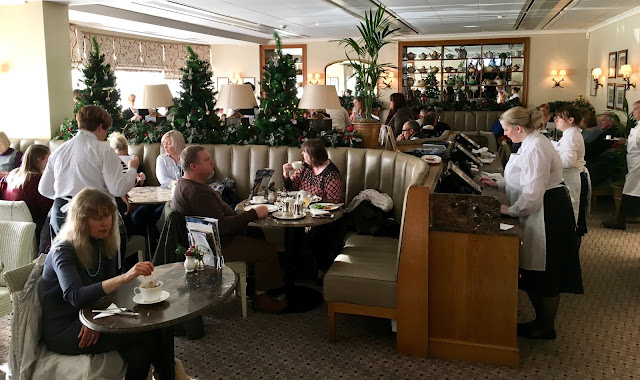 This will give you an idea of what it is like, this is the ground floor tea room, we were seated on the lower floor and there is another one for snacks too. 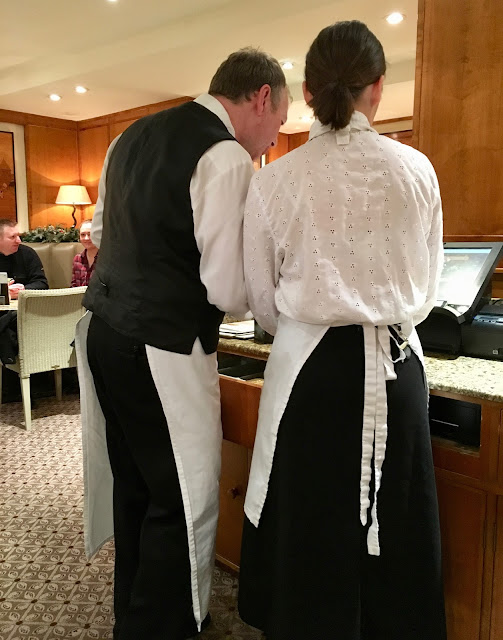 This is how the staff are dressed, it's like stepping back into another world.  The staff are so wonderful too, nothing is too much trouble, no wonder is has such a good reputation and it is always busy. 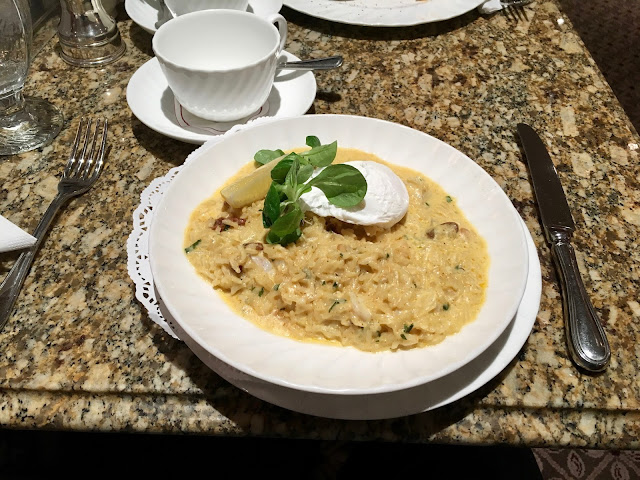 I always have kedgeree with a poached egg, if you haven't had it before it's sort of like risotto, it has smoked haddock, almonds and sultanas in and has a slight curry flavour, it is also very delicious. 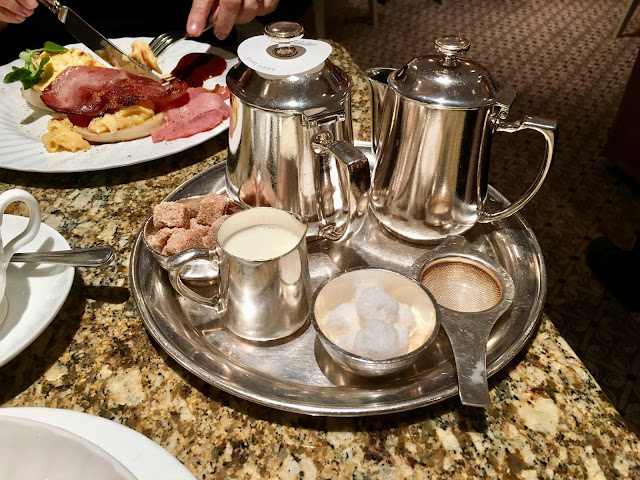 A tray of earl grey tea made with tea leaves, you can just see Jan tucking into her scrambled eggs and bacon on a bagel.

Want to see a pic of me in Bettys?  I took my glasses off specially. 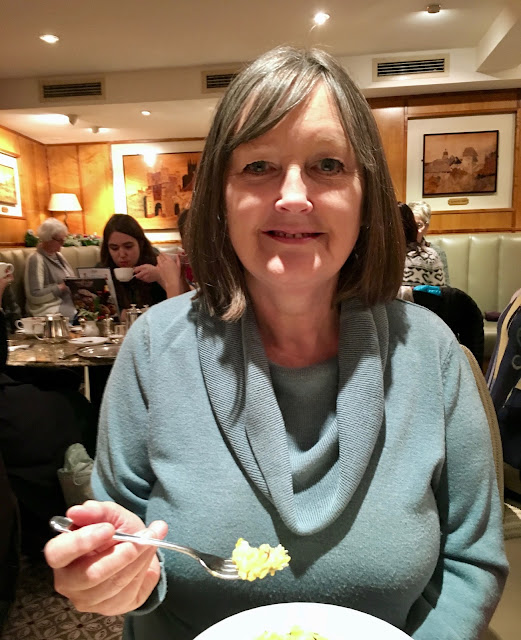 This is what I look like now, or at least last Saturday, I had my hair trimmed a bit yesterday but it's basically the same.

Talking about glasses I was at the hospital for a check on my eyes, they have healed well and I am going to have the other one done.  My distance vision in the first eye is almost perfect and when I get the second one done I can throw the distance glasses away, I only ever used them for driving before but I can't see properly without them with just one eye done.  I will still need a small prescription for close work and reading, I don't mind that a bit.  My world will brighten up even more when I get the second eye done as I still have a yellow cast looking through both eyes together, which I normally do.  I can't go around covering my left eye to see the bright and beautiful world now can I?

After Bettys I was so caught up in the show I forgot to take any more pics and there was no quilts on show anyway, shame.  I can show you some of what I bought though. 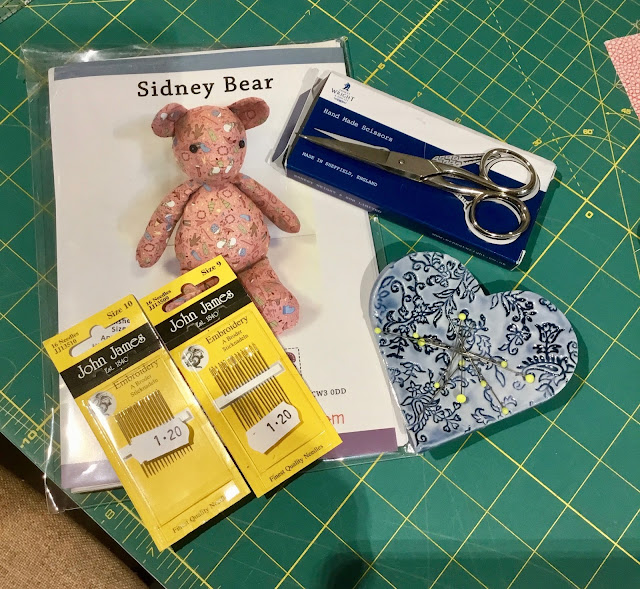 Embroidery needles as my local shop just sells multi size packs, a bear pattern so I can make a memory bear, the most beautiful ceramic magnetised pin tray, and a pair of Ernest Wright needlework  scissors, I have been after these for a while.  The scissors are handmade of Sheffield steel and the company has been going for over a hundred years.  They do a repair and sharpening service too, it says on their website the oldest scissors the had back for repair were eighty years old, how about that!  I particularly wanted a pair this size, I have smaller ones and bigger ones but for some jobs they are either too big or too small, these are perfect to fill the gap.  Let's hope I don't misplace them, I'm one pair short just now, I do hope I find them faster than the last time. 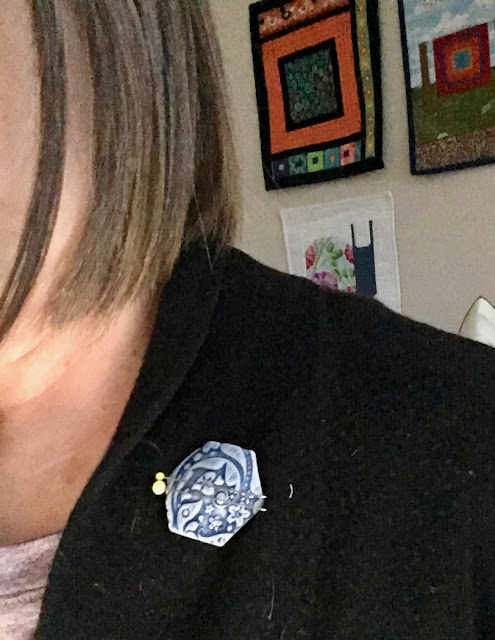 I also bought a ceramic needle catcher too as there is never a pincushion when I need it, they are either across the room or I knocked it on the floor, and it's handy for when I'm sitting hand stitching too, it beats playing hunt the needle in case one of the girls gets it in their foot, I found Indi chewing a flowerhead pin once, if there is anything dropped Indi will always find it.  I did get some other stuff, a Gypsy Gripper for my ruler which I haven't tried yet but they always seem to have good reviews, wool batts and needles for needle felted animals, but that's for next year, Jan is going to teach me she has made the most beautiful little hare and I have a love of hares.

Well I didn't have much sewing to show you but I do seemed to have rattled on a fair bit.  I was going to show you a bit more of the book from last week but I'll keep it for another day.

Linking up with:
Midweek Makers
Can I Get a Whoop Whoop?
TGIFF hosted by Faith and Fabric
Finished Or Not Friday
Crazy Mom Quilts