After a wonderful weekend.....

Home from my embroidery weekend, I had such a good time, although it was such a fraught week I wasn't sure I was going to make it.

It was my turn to drive, now I'm not a confident driver, although I have been driving for over 30 years, I just don't like driving in areas where I don't know the roads, know what I mean?  It was ok though, I had my sat nav, and the lovely Jan helped direct me so we didn't miss the turnoff we used to miss everytime we went through Carlisle, does anyone else do that?  Even though the sat nav directs you still miss it?

On arrival we went straight to our rooms,  I had one I'd had before, small but cozy, and I only entered it three times in the weekend.  Once on arrival to unpack, later that night when I went to bed, and at the end of the day on Saturday.  When I left it on Sunday I took my bag down to the car before breakfast and my last sessions before finishing with a lovely lunch and home.

As we were slightly early we popped down to the local distillery, no, not for a tipple, and after all I was driving and I never drink any alcohol when I'm driving, we had tea and, no, not cake, it was SCONES!  Plain ones with jam and cream, delicious, but in all honesty not a patch on the one I had at Jan's last week with homemade jam and cream, now that was stupendous.

Back for the first session, do you want to see where I started from? 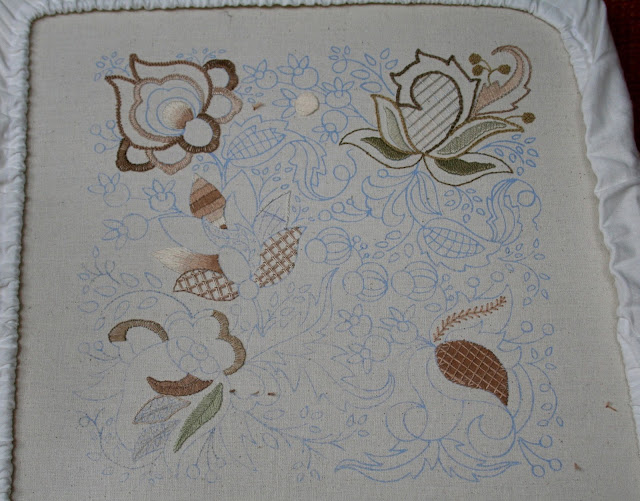 Yes, exactly where I ended after my last weekend, no progress made at all.  I always have such a great time and really enjoy my embroidery Higham Hall, but then life and quilting take over and I never seem to get around to my homework.  Just a reminder the design is Jacobean Embroidery by Hazel Blomkamp who I believe is from South Africa.

Want to see how I got on this weekend? 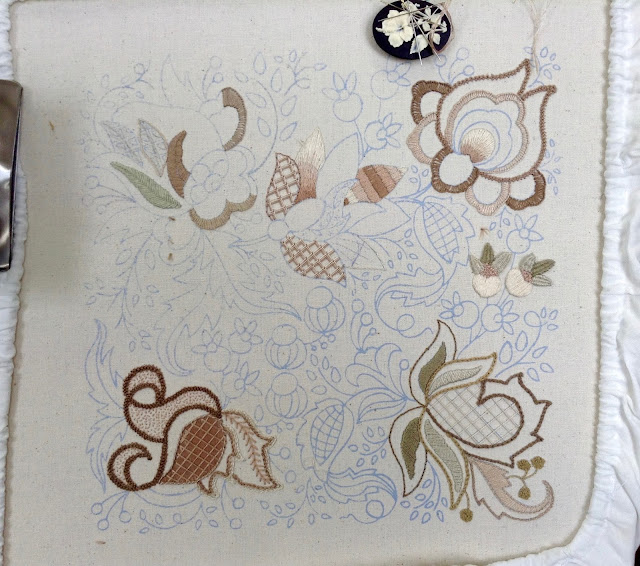 Oh yes, I worked hard.  I'm not the fastest in the world, though you have probably already sussed that anyway.  Look closer and I will explain what I did do. 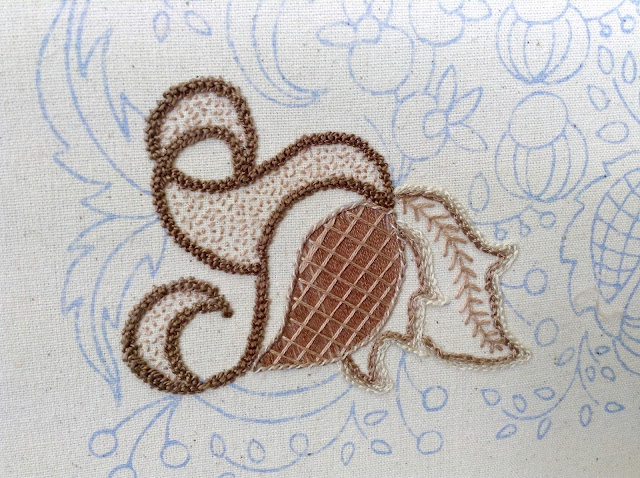 Moving on to the next section. 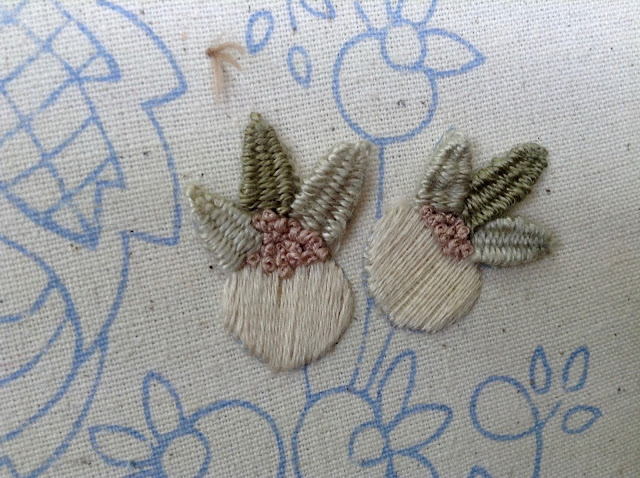 One of these was already part done, it is padded satin stitch so, after stitching around the edge in split stitch I did the underneath layer using two strands of DMC stranded cotton, then the Satin stitch over the top stitching in the opposite direction using one strand, each time going over the split stitch edge.  I then added picot leaves, which I had done once before but it was a while so I needed a refresher and a little practice first.  I then finished it off with french knots using two threads.

My homework, and I do hope to get at least some of it done (but don't hold your breath because that's how I always think at the end of a weekend), is to do more of the little berries with picot leaves.  There is also some padded satin stitch in greens, and some gold stems with french knot berries I can do.  I also have a double row of back to back buttonhole stitch to do at the bottom of the area I was working on at the weekend.   The area at the top left on the first pic I will be taking out, it was the first bit I did, it's rubbish, even by my standards, and the colours no longer match as it develops and I increase my thread selection. 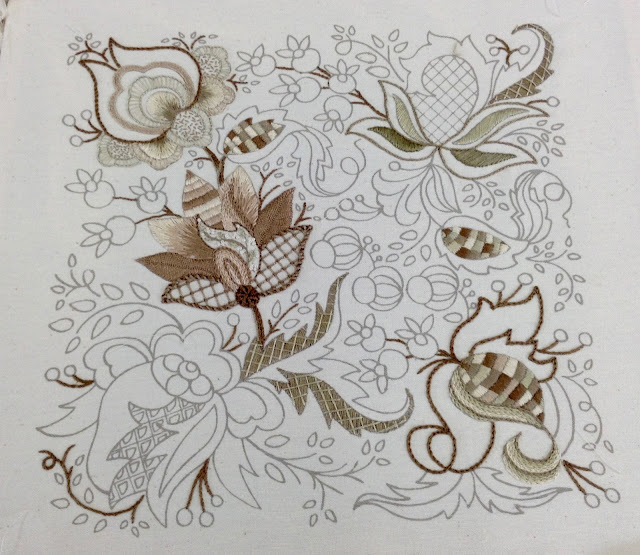 This is the same design by another student.  As you can see she has a different interpretation to me, she has also been doing embroidery longer, it's lovely isn't it. 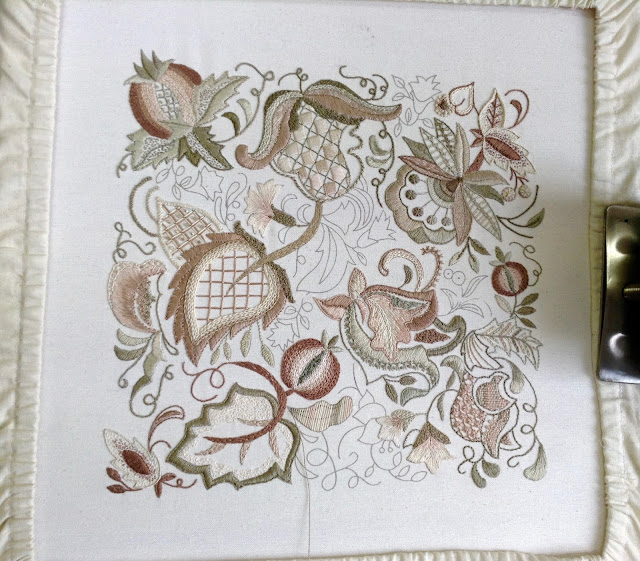 This is by the lovely Jan, a different pattern but by the same designer.   Although we started at the same time she does her homework :)

Now for some different work by our classmates. 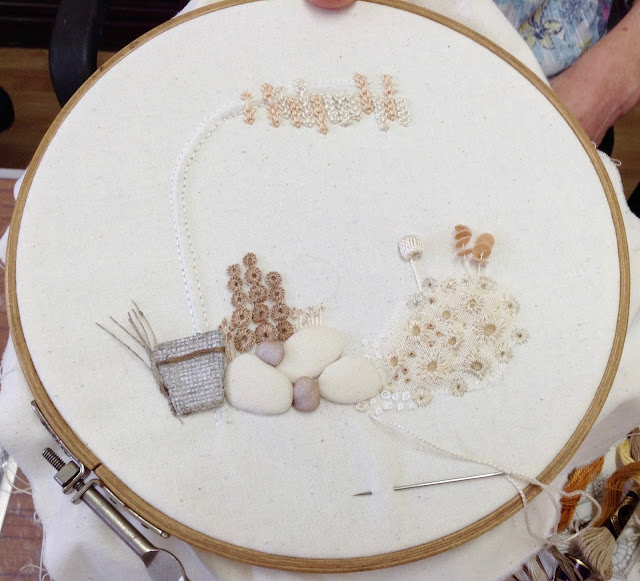 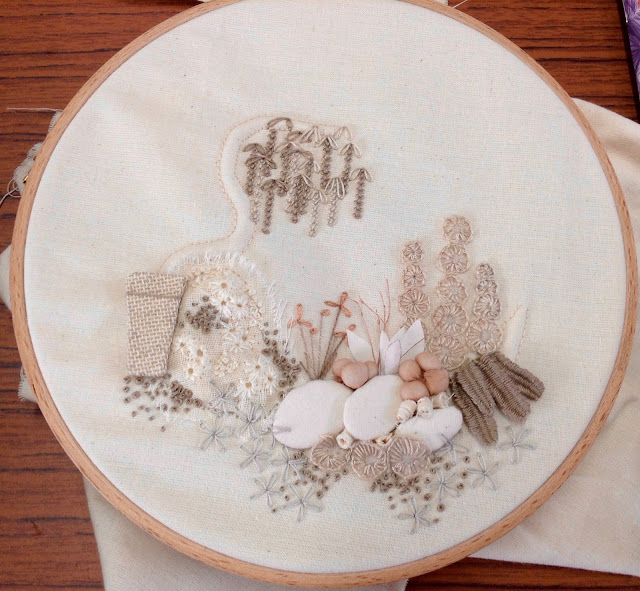 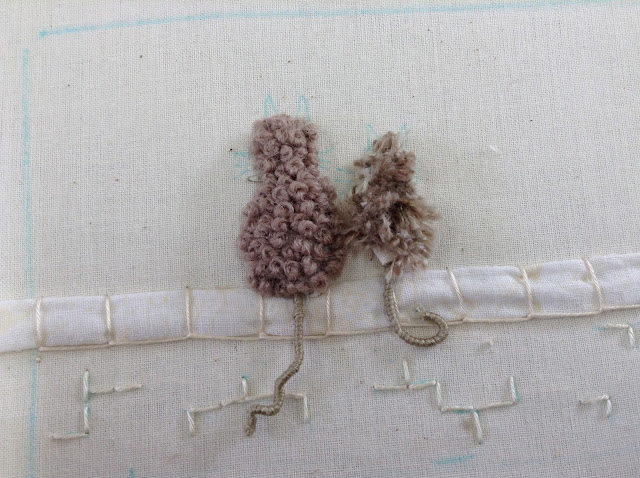 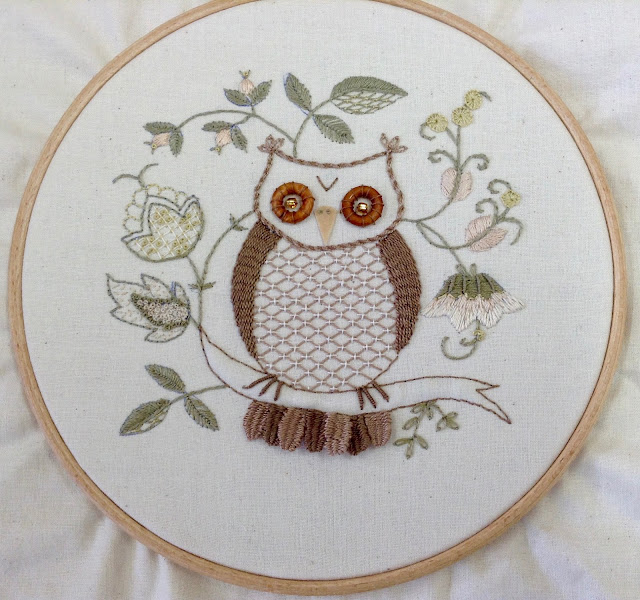 This work is Calico Gardens, it's like stumpwork, only in whites and neutrals. The designs can be anything really, from a garden shed to the seashore, animals and birds.  I love this owl, it's on my bucket list. 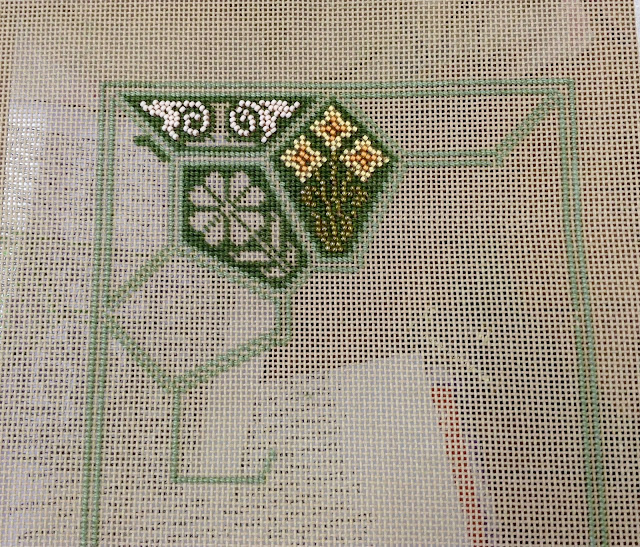 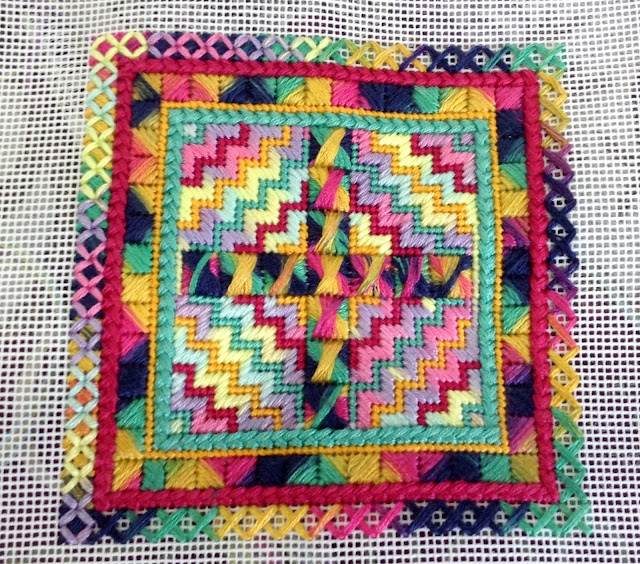 There are all different kinds of work. 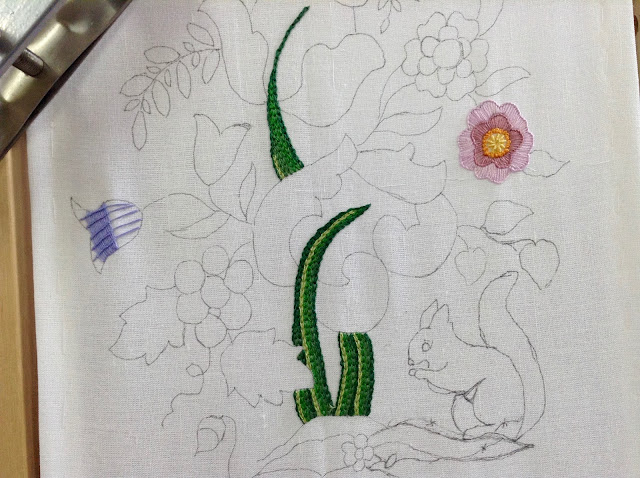 This was done by the oldest member of the group who is in her 80's.  She started it on Friday evening from scratch, first tracing out the pattern and putting it in a frame before she made a single stitch.  This version is slightly different from the pattern, she wasn't happy with the squirrel, so, she went along to another class which was fantastic drawings with coloured pencils, there was a cabbage which looked so real I thought I should be able to pick it up.  The teacher is a professional and has exhibitions every other year.  I digress.  Anyway, she asked the teacher if she would draw her a squirrel, so the teacher obliged.  You can get away with anything at 87.  She used to do patchwork and quilting but doesn't anymore, she finds embroidery is easier on her hands.  I hope I can stitch like her at 87, I wish I could stitch like her now!

So, no quilting to show you this week.  I have done a little but I'm saving it, for next Tuesday is my turn to so a guest spot for Jen at Quilter in the Closet, and I am lunching the start of my next quilt, so please come back to see it and help me make my first ever guest spot a success. Before you ask I haven't forgotten about my circles quilt, it will be making an appearance in a couple of weeks.

This is the last week of the New Quilt Bloggers Blog Hop,  the girls have been waiting all this time, so please pop over and say hello to some of them.  In my hive it is

I am so looking forward to next week but until then,
Smiles from
Kate x
Linking up with

Freemotion by the River
Lets Bee Social
Needle and Thread Thursday
Can I get a Whoop Whoop ?
TGIFF
Cooking up Quilts
Super Mom-No Cape

Email ThisBlogThis!Share to TwitterShare to FacebookShare to Pinterest
Labels: Embroidery