Do you have weeks when you make a lot of progress and then a week when it is like sewing through treacle?  Well, that's what it feels like this week.

It's just been one of those weeks when everything seems to conspire to stop me sewing, and when I do sew I can't find what I want and it takes me ages to make very little progress.

It's been back to the circles, and I suppose I shouldn't expect to race ahead, after all I chose to appliqué them, and it was supposed to be a pick up and go project, but hey, I'm not always known for my patience. 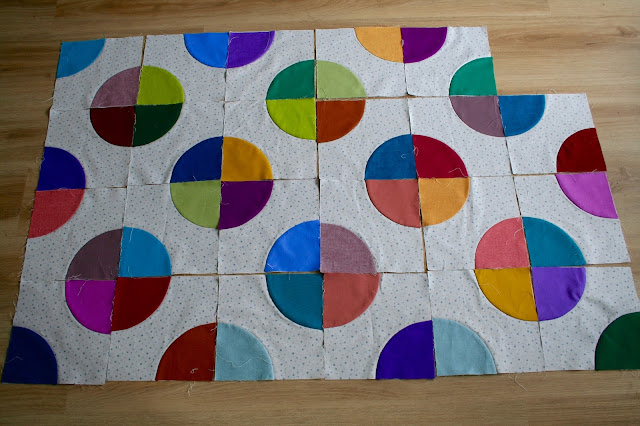 So here is where I am now, from 16 completed blocks last week I now have 23 this week.  I have been struggling with colours, the original fabric pull didn't have enough variety for the pattern so I ordered a pack of Amish Jewels 10 inch squares.  While this has given me more variety it has also brightened it up.    This is not the layout by the way and I have more colours and shades to add. 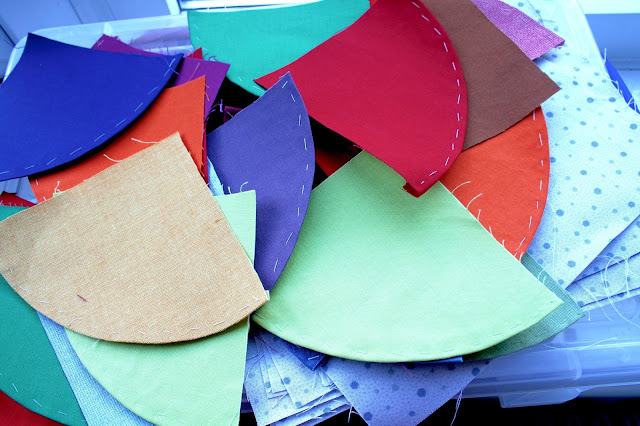 I have another 26 all ready to appliqué onto the blocks.  I don't know what has happened to this pic, some of the colours are quite distorted, the beige is yellow, I think, it is definitely not beige anyway.

I have made two quarter circles in most colours, and three in about six or seven because I ran out of colours.  Well, I did have another three or four but they were too similar to what I already had.

So what do you think of it so far?    I think it needs another element, I have an idea but I will know better when I finish the blocks.

I also took two skirts up for my Mother in Law this week.  She just had her 90th birthday and has gone blind so she needs a bit of help with things.

I have been choosing fabrics this week though, no I'm not telling, it's a surprise.  I'm doing a guest post on Building Blocks Tuesday later this month, yes, really, you can believe it, I tell you true.  So I just thought, as I haven't done one before, I would do something different, a quilt on my wish list for ages, to celebrate.  And maybe I could have some cake...........

That's all my news for this week, except it is only 10 days until I go back to Higham Hall for another embroidery weekend.  Maybe it's time I did my homework.

Until next time
Smiles from
Kate

Linky Tuesday
Let's Bee Social
Needle and Thread Thursday
Can I get a Whoop Whoop ?
TGIFF
Crazy Mom Quilts
Posted by Kate @ Smiles From Kate at 20:53