with Gypsy Wife.  I can't help it, I have never had this happen before.  If I'm not in my sewing room making blocks, I'm thinking about making them, choosing colours, discarding, choosing again, and all in my head.  Oh and you wouldn't believe how long that takes me, literally hours, then I will start making it and change them again.

So, where are all these blocks I have been making?  Can't tell, no, I decided I am going to drip feed them to you, just like in the sew along.  I may have to have a few weeks off quilting in October so if I do I will still have something to share, that's the theory anyhow, I will be scheduling some posts just in case and I can always edit and add to them to let you know what's happening. 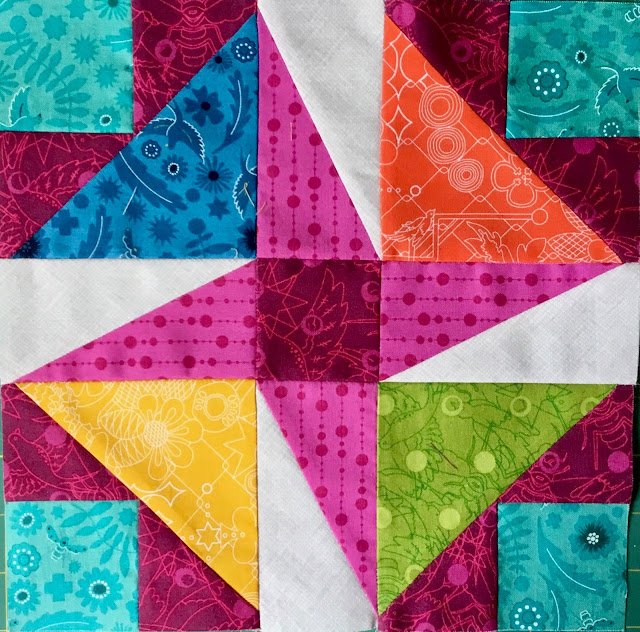 Crazy Anne.  This is the second block with somewhat of a reputation, but I checked it out, read lots of tips, some helpful some not and just went for it.  The one tip that was really helpful was to use a Tri Rec ruler to make the half square rectangle bits AND I already had one, wonderful.  The blocks went together like a dream and Anne wasn't as bad as her reputation.  Mind you I do use very scant seams and I'm happy to report that so far I have not had a single block end up small, which is the most common thing I hear.

Being in a couple of Facebook groups to do with Gypsy Wife has had a great bonus, I discovered a new app, and this is what I did....... 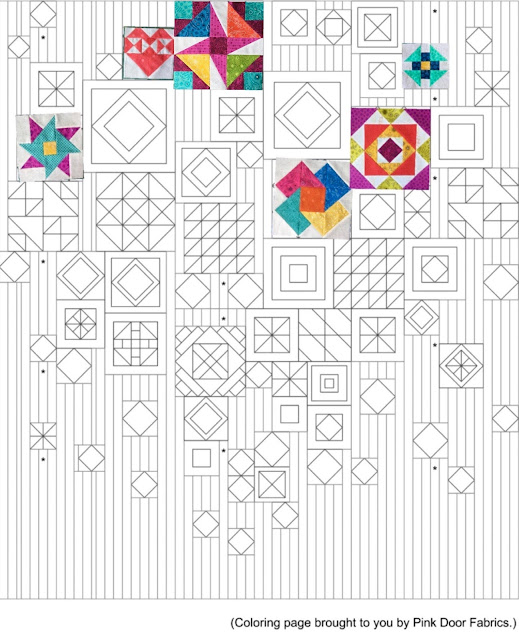 Isn't this helpful, I took a screen shot of the pdf of the colouring page by Pink Door Fabrics, opened it up in the app, and added pics of my blocks.  I should have cropped them a bit more and got rid of the seam allowance though but it gives a great indication of how the colours will mix together.  Here are the first five blocks for the first five weeks, and no I can count, you get a bonus, I had already added a Puss in the Corner block which is week eight so you get that too.  Don't worry though, there are two Puss in the Corners so you will get a new block in week 8.

If you are interested in the app it is piZap and best of all it is free, although it says there are in app purchases, although I haven't been asked if I want to buy any so far.  I would recommend using it on a tablet rather than a phone though, that would be just too fiddly.   There is annoying adverts that come up after you press 'save' though so I press to close it fast.  I can put up with it as there are none while I am actually using it.  I'm not trying to advertise the app mind, remember I don't have sponsors or anything like that and I don't want to either, for me it would take the joy out of blogging and just saying whatever comes into my head if I had to think about advertising stuff.  I blog because I enjoy it and for no other reason.  That said I can understand those who do have sponsors, quilting isn't a cheap hobby, we are all different at the end of the day and what is right for one is not necessarily right for another.  Enough said.

Now I am going to shock you, at least shock those of you who have been reading for a while, here it comes......... 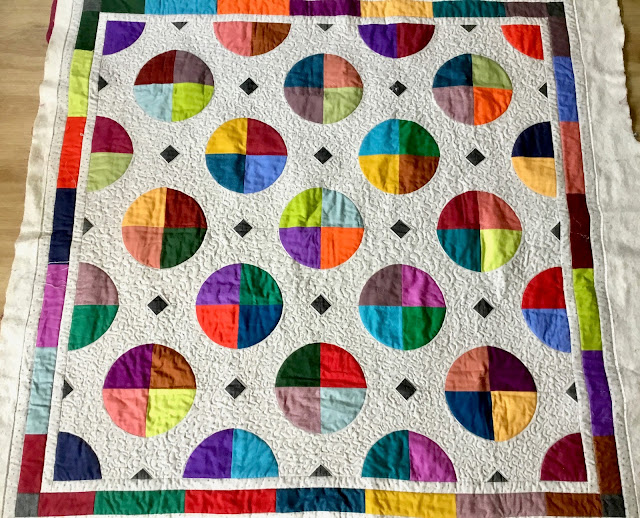 Circles, I've been doing free motion quilting!  A squiggly meander in the background.  No, I was beginning to think I wouldn't see the day either! 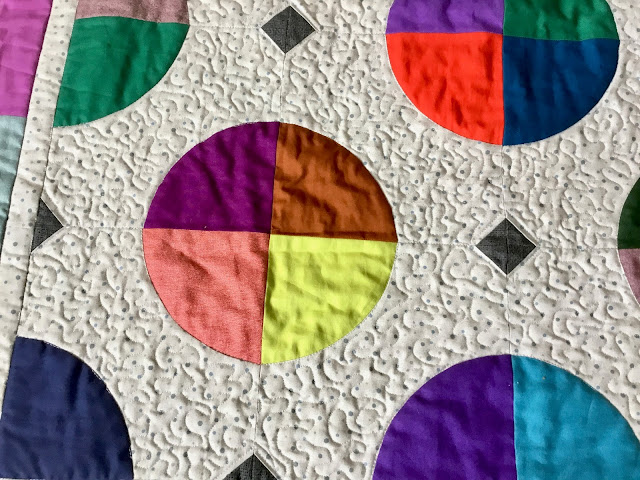 Have a closer look.  It's fairly even although it varies slightly in places but hey, tis done and I'm happy, ecstatic actually.  I'm leaving the dark grey diamonds unquilted so they pop, I'm really glad I decided to add them they bring a new dimension to the quilt, in my opinion!  The circles will be the next thing I do, then the borders.  I am hoping to get it finished by the beginning of October, keep your fingers crossed.  Just don't look at the back......... 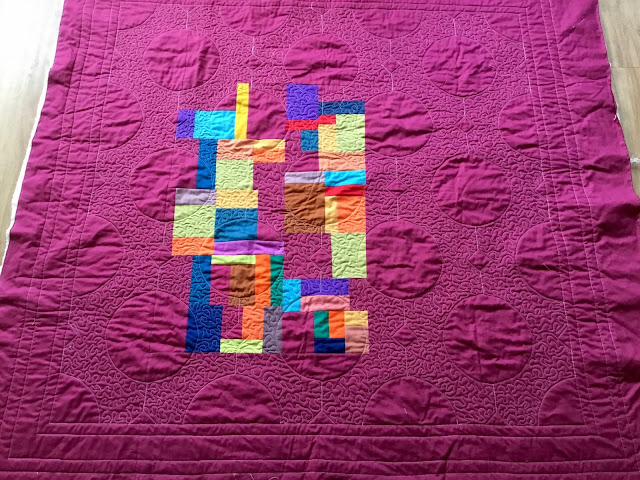 I said not to look at the back.  Well, go on then what do you think, inspired or dog's dinner?  Closer?  You want jam on it!   Oh all right then. 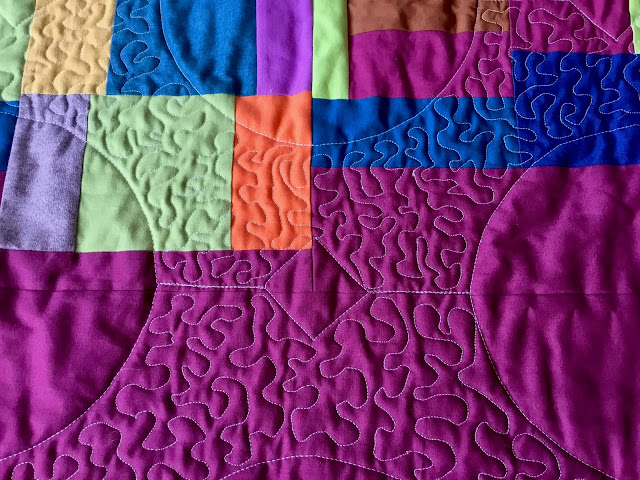 The colours are slightly distorted on this pic, it's more of a reddy burgundy like the first one, but a bit deeper.   It does give you a good look at the quilting though.  As you can see the size of the meander does vary a bit but in the grand scheme of things and as it is my quilt who is to notice or to care?  My only real mistake was to use solids instead of a tone on tone fabric and thread of a different colour to the the solids to boot,  AND advertise the fact.  I've made a mental note about THAT one.

I'm going away next week but I plan on scheduling a short post before I go which will be due Wednesday.  I won't be here to link up so if you normally read my blog on a regular link up you will have to get me direct next week,  IF you want to read my ravings that is!  I will have no wifi, no phone signal, and no tv either.  Retreat?  I would love another quilting retreat, I haven't done one for five years when I went to France for a week with Sandi Lush doing hand quilting.

Linking up with:
Midweek Makers
Wednesday Wait Loss
Needle And Thread Thursday
Can I Get a Whoop Whoop?
Finished or Not Friday